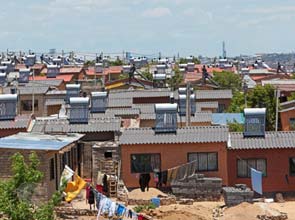 These are two of the largest project finance transactions ever completed in South Africa and are among the largest renewable energy projects in the continent.

Two solar photovoltaic projects in South Africa’s Free State and the Northern Cape will be delivering renewable energy for more than 50,000 homes in the region by mid-2014.

These are two of the largest project finance transactions ever completed in South Africa and are among the largest renewable energy projects in the continent.

Both projects will each have a capacity of 75 megawatts and are signed up with 20-year power purchase agreements with Eskom, the South African power utility.

Construction will be done by another consortium led by international contractor ACS Cobra and the Madrid-based Gransolar and South Africa’s Kensani Energy EPC.

Letsatsi and Lesedi were selected by the South Africa Department of Energy in the first round of bids under the South Africa Renewable Energy Independent Power Producer Procurement Program.

South Africa has set a renewable energy goal of 10,000 gigawatt-hours by 2013. The procurement program was designed to facilitate the integration of 3,725 MW of renewable energy into the grid.

Aside from renewable energy, the projects considered under the program were chosen for their projected socio-economic effects – they are expected to create jobs and bring in investments.

The two projects will also set aside a percentage of total project revenues – around $59 million – over the life of the project that will be invested in enterprise and socio-economic development programs for the surrounding communities.

Window 1 of the program began in November of last year with the first 28 preferred bidders announced in December. The Department of Energy is expecting $ 5.3 billion in investments in the country through this first window. – Katrice R. Jalbuena