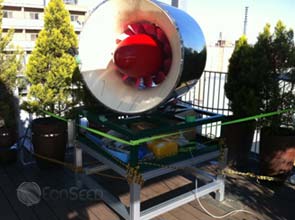 The ring-type wind power generator, which was developed by Tokio Fukui, can generate five times as much power compared to a wind turbine with the same bore diameter

A unique wind power generator is getting support from an international crowd funding body.

The ring-type wind power generator, which was developed by Tokio Fukui, can generate five times as much power compared to a wind turbine with the same bore diameter. The wind power generator is lightweight and has no shafts or any exterior parts, and only needs a 2-square-meter area to be installed in – it is small enough to fit in an elevator.

The wind power generator can achieve a rated output of 3 kilowatts, and can generate as much as 10 megawatt hours annually. And because the vanes do not stick out, it is safe for both wildlife and humans. The wind power generator’s battery is housed in a stand so it can function as an uninterruptable power supply.

But the device can still be modified to perform better, and with help from the samurai.jp Association – a project which aims to expose more of the Japanese culture to the world – the help of Indiegogo, a crowd funding body, was enlisted.

Through the help of Indiegogo, Mr. Fukui is asking for assistance to develop a plastic rotor for the device, which is currently utilizing a die-cast rotor. With a plastic rotor, the device can become even lighter and help increase its power output.

“We are seeking support via this Indiegogo campaign to enable conversion of the die-cast rotors used in the prototype into plastic, as a step toward commercializing the turbine. We hope to use the development of this new product to help create employment and develop related business in the Tohoku region, which has suffered great hardship since the 2011 Tohoku earthquake and tsunami,” said Kiyomi Tagawa of the samurai.jp Association.

“We hope people will support our efforts to spread wind power generators that fully utilize the gifts of nature,” said Mr. Fukui.

Mr. Fukui seeks to commercialize the wind power device through Peace Frontier, a company slated to launch this October, who will be in charge of developing, marketing, and selling the device. – EcoSeed Staff