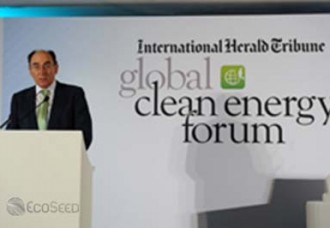 Noting that traditional electricity industry has a solid performance because of its predictability, Mr. Galan pointed out that the increasing risk perceived as a result of changing and non-predictable regulatory framework is driving investors

Noting that traditional electricity industry has a solid performance because of its predictability, Mr. Galan pointed out that the increasing risk perceived as a result of changing and non-predictable regulatory framework is driving investors towards the United States and emerging markets.

The Spanish multinational electric utility company’s chairman cited some European countries having taken policy decisions that have incentivized massive deployment of certain immature renewable technologies. He explained that the consequence to this is the closure of power plants with much cheaper production costs and with no carbon dioxide emissions.

“Considering the vast impact that too much intervention and wrong energy policy have in the economy as a whole, Governments should focus on defining a clear energy policy, rather than playing politics with energy,” said Mr. Galan.

Mr. Galan projects that the winning technologies of the global energy will include two renewable energy sources – hydro and wind, which should all be backed by modernized distribution infrastructure and new smart grids.

In his forecast, he revealed that solar photovoltaic and solar thermal are actually the most expensive and less efficient technologies today. Amidst the rapid deployment of solar technology, he argued that if some countries had waited a few years before massively installing PV plants, costs for the citizens would be much lower.

“European smart grids along could require an investment of up to $150 billion in the upcoming decade,” said Mr. Galan, citing the need for reinforcing network infrastructure which will allow for improved quality of service and reduced grid losses.

Iberdrola’s chairman has also reviewed major energy challenges that the world currently faces, saying that there are 1.3 billion people that have no access to electricity. With International Energy Agency estimates suggesting that global energy demand will grow by 35 percent, it is highly likely that there will be a significant growth of carbon dioxide emissions, particularly from the developing and emerging countries.