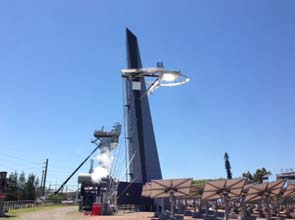 Australia’s national science agency, the Commonwealth Scientific and Industrial Research Organization or CSIRO, is pioneering a means to creating highly pressurized steam using solar power that they believe can improve the performance of solar thermal plants.

Before CSIRO’s experiments, supercritical levels of steam have only ever been reached using the burning of fossil fuels. The best commercial solar thermal plants have been able to achieve has been subcritical steam, which doesn’t have the same pressure levels.

By achieving supercritical steam levels using solar, CSIRO is paving the way for the creation of more clean and renewable energy.

“Instead of relying on burning fossil fuels to produce supercritical steam, this breakthrough demonstrates that the power plants of the future could instead be using the free, zero emission energy of the sun to achieve the same result,” said Dr. Alex Wonhas, CSIRO’s Energy Director.

The team developed a fully automated control system which predicts the heat delivered from every mirror in a solar thermal installation. This allows them to achieve maximum heat transfer while avoiding overheating. With this amount of control, the researchers were able to accurately recreate the temperature and pressures needed for supercritical success.

The world record, set in May of this year was a pressure of 23.5 megapascals and temperatures up to 570 degrees Celsius.

“It’s like breaking the sound barrier; this step change proves solar has the potential to compete with the peak performance capabilities of fossil fuel sources,” said Dr. Wonhas.

The $5.68 million research program is supported by the Australian Renewable Energy Agency and is part of a broader collaboration with solar thermal company Abengoa Solar. – EcoSeed Staff