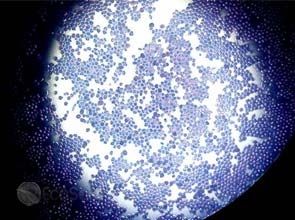 “This work goes a long way to squeezing the last drop of ethanol from sugar,” adds Gerald Fink, an M.I.T. professor of biology, member of the Whitehead Institute.

The M.I.T. team boosted yeasts tolerance to ethanol by altering the composition of the medium in which the yeast is grown.

Ethanol and other alcohols can disrupt yeast cell membranes, killing the cells. By adding potassium and hydroxide ions to the growth medium, the M.I.T. team grew yeast with cells that can compensate for the membrane damage.

With their ethanol-tolerant yeast, the M.I.T. researchers were able to boost ethanol production by about 80 percent. They also showed that this approach would work with commercial yeast strains and other types of alcohols, such as propanol and butanol, which are even more toxic to yeast.

“This work goes a long way to squeezing the last drop of ethanol from sugar,” adds Gerald Fink, an M.I.T. professor of biology, member of the Whitehead Institute.

Ethanol increases the porosity of the cell membranes of yeast, making it difficult for the cells to maintain their electrochemical gradients. The electrochemical gradients of a cell membrane are the differences in ion concentrations inside and outside the membrane, which produces energy that the cell harnesses to control the flow of molecules into and out of the cell.

By increasing the potassium concentration in the growth medium of yeast, the pH concentration outside the yeast cells are increased, strengthening the gradients and allowing them to survive longer. The longer yeast survives, the more ethanol it can make.

The research was funded by the M.I.T. Energy Initiative and the Department of Energy. – EcoSeed Staff