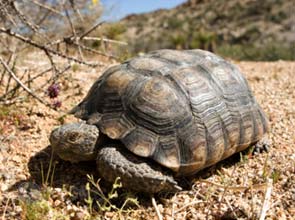 The bureau requested BrightSource Energy and developer Bechtel Power Corporation to temporarily stop work on phase 2 and 3 of the 392 MW solar project in the Mojave Desert in April of this year to reassess the project’s impact on desert tortoises that happens to live on the site.

Work was allowed to resume after the United States Fish and Wildlife Service issued a new assessment, known as a biological opinion, concluding the tortoise populations would not be jeopardized. The project remains on schedule despite the suspension, BrightSource said in a statement.

The biological opinion tells BrightSource what it needs to do to protect certain species of plants and animals in the area. It includes monitoring, testing, quarantining and relocating captured and sick tortoises to protect them from construction activities.

The desert tortoise, a federally-listed “threatened” species, prompted BrightSource in February 10 last year to change the original design for the Ivanpah project. The company reduced the size of the 4,000-acre solar thermal power plant by 12 percent, cutting its electricity generation from 440 megawatts to 392 MW.

BrightSource and its partners NRG Energy, Bechtel and Google Inc. have now committed up to 100 trained desert tortoise biologists to be present on the project site every day, supervising construction activity to ensure that tortoises are not physically harmed in any way.

“One of the biggest challenges facing the desert tortoise population is the high mortality rates for juveniles due to high predation rates,” said Mercy Vaughn, the lead biologist for the Ivanpah project.

Brightsource set up a head-start program to take care of young tortoises during approximately the first five years of life, or until they are large enough to resist predators. In their natural environment, less than ten percent of juvenile desert tortoises survive.

“This project is leading the way for private industry serving as a proactive model in conservation of the threatened desert tortoise,” added Ms. Vaughn.

BrightSource has gotten a $1.6 billion loan guarantee for the $2.2 billion project. The government promises to pay back the loan, which comes from Treasury’s Federal Financing Bank, if the company defaults.

Ivanpah is BrightSource’s first solar farm, and it has gotten investments from NRG and Google. NRG is the largest investor in the project, putting $300 million in the project in October 2010 while Google invested $168 million in April this year.

Solar power in the Mojave

Ivanpah is one of nearly a dozen solar power plants to be built in the Mojave Desert, which spans 20 million acres of land across four states including California and Arizona.

Like Ivanpah, most of the projects are solar thermal power plants that concentrate sunshine on collectors that, in turn, heat a liquid solution to create steam. Steam runs the electric generators. Ivanpah uses 173,000 flat mirrors called heliostats to focus sunlight.

In August last year, the California Energy Commission approved proposal to build a 250-megawatt concentrating solar power plant in Kern County. The $1 billion Beacon solar energy project was proposed by NextEra Energy Resources to be located at the western edge of the Mojave Desert and will cover about 2,000 acres of farmland

Solar Trust, a joint venture between German companies Solar Millennium and Ferrostaal also won a recommendation for final approval from the commission to build the Blythe solar thermal power plant. It is designed to house four 250-MW power plants with a net output of 242 MW each.