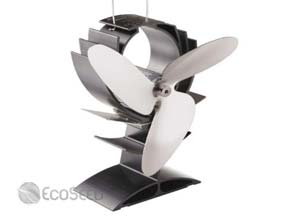 The Ecofan is designed to circulate warm air produced by residential wood stoves, which can make the room more comfortable using less fuel. The fan works via thermoelectric technology, which converts heat into electricity. The generated electricity propels the fan’s blades, circulating warm air without the use of batteries.

“We are pleased to help people save money, and were excited to see that the savings can be as much as 19 percent,” says Elliott Good, sales and marketing manager for Caframo. “Ecofans have added benefit of reducing the amount of trees used and particulates released into the air.”

“If every wood stove owner in North America was using an Ecofan, we are talking about the potential elimination of thousands of tons of particulate emissions,” he added.

The research team developed a protocol and a procedure to measure, evaluate and verify the effectiveness of Ecofan in reducing the quantity of fuel used. The tests were designed to maintain a human comfort level of 22.5oC, as set by the ASHRAE 55 Standard, which outlines conditions for environmental acceptability.

The test facility was a room within a room, with the inner room set up similar to a living room with a wood stove, and the outer room set up to control the outside temperature, modeling the heat loss from a typical house.

The tests show comparable conditions and burn rates between wood stove operation with and without the Ecofan. The researchers took note of the designated comfort temperature and the total weight of wood burned to establish the wood usage outcomes.

The Ecofan sells for $99.99 to $199.99 and are available in the United States and Canada through major retailers such as Ace, The Home Depot and Home Hardware. The Ecofan is also sold throughout Europe through local distribution partners.