House and Senate face off on cut-riddled budget for E.P.A., agencies 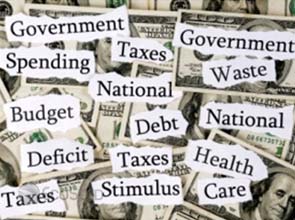 The Republican-led House has introduced a new budget bill that would fund the national government until September 2011, but would cut a total of $61 billion from state institutions like the Environmental Protection Agency initiatives.

Meanwhile, Senate Democrats are planning to hold discussions on a separate bill with a more moderate $51 billion cut from agencies and their programs.

Speaker John Boehner said the House has crafted a bill that would reduce spending and improve the economy.

“Republicans have put forth a credible plan to cut spending and help create a better environment for job creation,” he said in a statement.

Senate Majority Leader Harry Reid said he and his fellow senators will engage in marathon sessions to vote for the passage of their version of the funding bill, saying the Republicans’ “irresponsible” proposal slashes investments, cuts jobs and sacrifices security and education.

“Yes, it cuts a lot of money today, but America would lose so much more tomorrow because these cuts are made arbitrarily, without regard for consequences. Our plan cuts $51 billion from President Obama’s budget, but in a much more responsible way. We’re eliminating redundancies, ending unnecessary bureaucratic programs, and cutting funding for earmarks,” he added.

“The House bill would cause backlogs in social security claims, undermine nuclear weapons safety, and close poison control centers in America,” he said, listing some negative effects of the House proposal.

The Democratic Policy and Communications Committee on Friday released a state-by-state breakdown of the 700,000 jobs that would be lost under the Republicans’ spending plan.

It said the bulk of the House-approved cuts will come from environmental and energy programs.

The House funding bill reportedly cuts $238 million from the E.P.A.’s environmental programs and management, an eight percent slash from the $3 billion budget in 2010. It also scraps $31 million in science and technology funding from the 2010 budget of $856 million.

“Most communities cannot afford these projects on their own and the E.P.A.’s funding is vital if these projects are to get done,” the spending committee said.

The Senate bill would undo about $1.9 billion in funding cuts for the E.P.A.’s state and local water infrastructure grants, which was included in the House proposal and which got the bulk of slashes in the $3-billion E.P.A. budget cut from $10.3 billion.

Also, the Senate proposal did not contain measures that would stop the E.P.A. from implementing water and air pollution rules, climate regulations and greenhouse gas reporting requirements, unlike the House bill.

The Energy Department’s Office of Science and the Advanced Research Projects Agency-Energy or ARPA-E would face $523 million in cutbacks in the Senate proposal, compared with the House’s $1.4-billion slash.

Unlike the House bill which took $635 million from the program, the Senate proposal did not stop funding going to the Intergovernmental Panel on Climate Change, which gives money for climate responses in developing countries.

At the Interior Department, the Senate proposal would rescind $600 million in funding, restoring $162 million in House-proposed cuts to operations at the National Park Service, Fish and Wildlife Service, Bureau of Land Management and Forest Service, reportedly ensuring the salaries of 1,045 park rangers, forest rangers, law enforcement rangers and maintenance personnel.

The National Aeronautics and Space Administration receives a reduction of $461 million in the Senate bill, avoiding an $873-million cut by the House that Democrats say would disrupt ongoing science missions and cause layoffs of 4,500 middle class contractors who provide landscaping, information technology, janitorial and other services for NASA centers.

The National Oceanic and Atmospheric Administration’s operations and research is reduced by $110 million in the Senate bill, while the House cut $450 million.

In the Senate bill, the Energy Department’s nuclear nonproliferation program would see a reduction of $360 million, while the House bill will cut $648 million.

President Barack Obama, in a weekly address on Monday, underscored the importance of both chambers agreeing to a unified version of the spending plan.

“Over the last few weeks, Members of Congress have been debating their own proposals. And I was pleased that Democrats and Republicans in Congress came together a few days ago and passed a plan to cut spending and keep the government running for two more weeks.

“We need to come together, Democrats and Republicans, around a long-term budget that sacrifices wasteful spending without sacrificing the job-creating investments in our future,” Mr. Obama said.