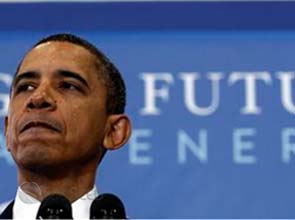 Mr. Obama outlined his strategy after spending days explaining the U.S.-led military action in Libya, where fighting, accompanied by unrest elsewhere in the Arab world, has helped push U.S. gasoline prices toward $4 a gallon.

In a speech that was short on details on how to curb U.S. energy demand, Mr. Obama did not pretend there were speedy measures to curb mounting fuel costs, which could threaten the country’s economic recovery by weighing on American spending and confidence.

«There are no quick fixes … We will keep on being a victim to shifts in the oil market until we finally get serious about a long-term policy for secure, affordable energy,» Mr. Obama said.

As he rolled out a blueprint on energy security, Mr. Obama said the country must curb dependence on foreign oil that makes up roughly half of its daily fuel needs.

Previous presidents have made similar promises on energy imports that they failed to meet. And any new policy initiative can expect tough opposition from Republicans, who see high energy prices hurting Mr. Obama and his Democrats in the 2012 presidential and congressional elections.

Republicans have mocked the idea of Mr. Obama curbing oil imports a week after visiting Brazil, where he said the United States wanted to be a good customer for its oil exports.

The United States consumed almost 20 million barrels of oil a day in 2010 of which roughly half was imported.

Noting natural gas made sense after discoveries of an estimated 100-years’ worth of domestic shale gas reserves, Mr. Obama urged Congress to pass legislation to encourage the use of natural gas burning vehicles.

He said his administration would help private business break ground on four next-generation biorefineries, and «look for ways to reform biofuels incentives» to save taxpayer money, without going into details.

Mr. Obama also reiterated nuclear power would be a part of the country’s long-term energy plan, stressing the lessons from the nuclear disaster in Japan would be studied carefully, while making just passing reference to climate change.

Mr. Obama’s election campaign goal of passing measures to curb U.S. greenhouse gas emissions has made little headway on Capitol Hill, to the dismay of environmental activists who complain it has slipped way down his list of priorities.

Analysts and experts said Mr. Obama’s goal is ambitious and that truly reforming U.S. energy use would involve sweeping changes, including possible fuel taxes to encourage Americans to change their habits, which could be politically toxic.

«I’m very skeptical it will have any impact,» said Edward Meir, chief analyst at MF Global in New York. «Presidents have been saying this since the days of Richard Nixon.»

Polls show Americans have mixed feelings about involvement in Libya, a third Muslim country with the United States still engaged in Iraq and Afghanistan, and they are clearly worried by high gas prices before the summer driving season.

The latest measures of consumer confidence have been dented by rising energy prices, which sap household spending and could derail the U.S. recovery if prices stay high enough for a long time, hurting Mr. Obama’s re-election prospects.

Those were his lowest ratings ever, Quinnipiac said.

Some analysts reckon Obama may tap America’s emergency oil stockpiles if U.S. oil prices hit $110 a barrel. Prices ranged between $104.13 and $104.81 a barrel in Wednesday’s trade.

The U.S. Interior Department estimates millions of acres (hectares) of U.S. energy leases are not being exploited by oil companies and the White House wants that to change.

This argument also helps the administration push back against Obama’s Republican opponents, who claim he is tying the hands of the U.S. energy industry by denying leases and restricting offshore drilling in the wake of the 2010 BP Gulf of Mexico oil spill.