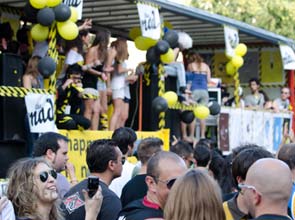 The event, called «24 Hours of Reality,» broadcasted a new live presentation about climate change every hour for 24 hours across 24 different time zones, in 13 languages.

It was organized by The Climate Reality Project, a grassroots environmental group founded and chaired by Mr. Gore.

The Climate Reality Project said in a July statement that the presentations aim to «tell the truth about the climate crisis and reject the misinformation we hear every day» coming from what Mr. Gore calls «well-financed disinformation and denial campaign run by the fossil fuel industries.»

Mr. Gore’s famous earlier attempt to explain to people that climate change is real was through the 2006 documentary film «An Inconvenient Truth.»

Featuring slide presentations and video explained by Mr. Gore, it earned $49 million at the box office worldwide, becoming the sixth-highest-grossing documentary film to date in the United States.

In 2007, Mr. Gore also launched a global series of concerts called «Live Earth» that was aired on eight networks under the National Broadcasting Company, lasting 93 hours.

But despite Mr. Gore’s efforts, fewer Americans than ever believe in climate change. An online poll of 2,163 adults conducted by Harris Interactive in June found that only 44 percent of them believe that carbon dioxide emissions are warming the Earth, down from 51 percent in 2009 and 71 percent in 2007.

Public perception of climate change has fallen steadily since the «Climategate» scandal of 2009, when 13 years of e-mails from the Climatic Research Unit of the University of East Anglia in Britain were stolen and leaked online by an unnamed hacker.

The scandal roused climate change skeptics, tainted the name of several climatologists and cast doubts on the Intergovernmental Panel on Climate Change, a United Nations scientific body that publishes what are considered definitive climate change reports.

A public opinion poll by Rasmussen Report last August said 69 percent of Americans surveyed believe it was likely that some scientists falsified global warming data. Only six percent said it was «not at all likely.»

What they did to counter this

The program kicked off Wednesday at 7:00 p.m. in Mexico City, the third most populated city in the world. There, Gerardo Pandal, area manager for renewable energy at Guascor de Mexico, talked about communities besieged by massive floods. He said this has grown more common around the globe because of unpredictable extreme weather.

The presentations then proceeded westward onto the next time zone, from Boulder, Colorado; Victoria, Canada; and Kotzebue, Alaska.

Each of the 24 top scientists, businessmen, and activists who presented narrated how climate changeaffected his or her country. Each speaker gave a 30-minute slide show presentation followed by a 30-minute discussion with a live audience.

The 24-hour broadcast was concluded with a presentation in New York City yesterday by Mr. Gore himself urging viewers to take action. The live feeds were featured and are currently uploaded on The Climate Reality Project’s Web site.

«The climate crisis knows no political boundaries. Ferocious storms and deadly heat waves are occurring with alarming frequency all over the world. We are living with the reality of the climate crisis every day. The only question is, how soon can we act?» Mr. Gore said in a statement.

«The one thing that we have all in common is the adverse effects that the climate crisis is having in our individual communities in all regions of the world and the common opportunity to solve this crisis,» Mr. Gore said at the final presentation in New York.

«It’s a problem [climate change and its effects] we can solve together and we can start by addressing the deniers of climate change,» he added.

«Fossil fuel companies and their allies will go to great lengths to deny the fact that climate change is happening now,» said Maggie Fox, chief executive of The Climate Reality Project.

«But we have one powerful response: Reality. We will dedicate our resources toward educating and engaging the public about the reality of the climate crisis and helping build the global movement for change.»