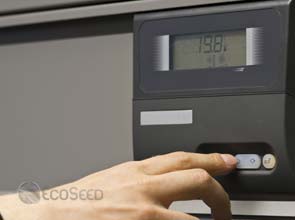 Energy consumption is a crucial issue for data centers that store and process important documents, records and information from almost all businesses around the world.

Singapore’s Nanyang Technological University and Japanese electronics company Toshiba have come up with a “cool” idea that can make data centers more energy-efficient, cutting their energy bills by one-third.

The advanced cooling technology works by using the air outside the date center for cooling purposes whenever possible, such as when the outside air temperature is lower than the warm air temperature inside the data center, the researchers explained.

Significantly, the test bed of this cooling system has already delivered good results, recording 40 percent in energy savings compared with conventional data centers operating in Japan, and representing potential to cut carbon emissions by about 2,800 tons.

“With energy costs ever rising, data centers around the world have an urgent need to reduce their energy consumption to cut costs and to conserve the environment,” said the Nanyang Technological University.

Toshiba’s outside air data cooling system was especially designed for regions with more temperate climates and humidity. Meanwhile, the Singaporean university’s I.C.T. innovations optimize the use of computer servers in a data centers by collating multiple applications from different servers into one server, then putting the other servers that are not in use into sleep mode, saving both electricity and energy required to cool them.

Typically, data centers apply air-conditioning, which uses air regardless of its temperature, to cool the computers tirelessly. As more energy is needed to cool down hot air, energy bills also climb.

When successfully developed, the Toshiba-N.T.U. advanced cooling technology can be deployed in all data centers in Southeast Asia, which in turn would generate notable savings both in energy and operating costs for governments and companies.

Data centers normally consume 100 to 200 times more energy than office buildings, while the energy cost is estimated to be about 50 percent of an office’s operating costs, according to the United States’ Department of Energy.

Associate Professor Ng Wee Keong, associate chair of research at the Nanyang Technological University School of Computer Engineering, said the project is one of the “first academia-operated green data centers” in the world intended for research purposes.

«[This] will spearhead Singapore’s research in green data center technological know-how. The data collected will be available to researchers all over the world for further analysis, and to further establish Singapore an international hub for data centre research and deployment,» he added.

Singapore, as a small island country, has been an ideal location for test beds for companies that seek to assess the feasibility of new clean technologies and processes before commercializing them. (Catherine Dominguez)