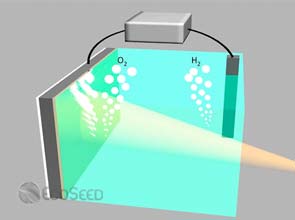 Water-splitting is one way to harness the energy of the sun even if the sun itself is not shinning.

“Solar cells only work when the sun is shining,” said study co- author Hongjie Dai, a professor of chemistry.

“When there’s no sunlight, utilities often have to rely on electricity from conventional power plants that run on coal or natural gas,” he said.

Supplementing solar cells with hydrogen-powered fuel cells that could generate electricity at night or when demand is especially high would be a greener solution then relying on conventional power plants during this period.

In a hydrogen fuel cell, water splitting is what enables the storage and release of energy. Two semiconducting electrodes are connected and placed in water. The electrodes absorb light and this triggers the water splitting reaction. The hydrogen created is stored as fuel while the oxygen is released into the atmosphere.

Reversing the process releases the energy as needed. The stored hydrogen is exposed to oxygen in the fuel cell and electricity is produced.

As the entire process is sustainable and also emission-free, hydrogen fuel cells are considered a vital component for a clean energy based world. The problem has been the cost of the water-splitting process which often uses expensive materials.

The problem with silicon though is that it tends to degrade when brought in contact with an electrolyte solution such as that used in most fuel cells.

“In fact, a submerged electrode made of silicon corrodes as soon as the water-splitting reaction starts,” said Mr. Keeney.

One successful attempt to lessen the corrosive effect of water-splitting on silicon was conducted in 2011 by another Stanford research team.

They coated the silicon electrodes with ultrathin layers of titanium dioxide and iridium. These electrodes were able to last and split water for eight hours without corroding. However, as iridium is quite costly, the process was not commercially viable.

Inspired by the 2011 attempt, Mr. Dai and Mr. Keeney and their team tried coating their silicon electrodes with the lower-costing metal nickel.

“Nickel is corrosion-resistant. It’s also an active oxygen-producing catalyst, and it’s earth-abundant. That makes it very attractive for this type of application,” said Mr. Keeney.

A 2-nanometer-thick layer of nickel was added to a silicon electrode, paired with another electrode and placed into a solution of water and potassium borate. When exposed to light and electricity, the electrodes began the water –splitting process.

“The result suggest that an ultrathin nickel coating not only suppresses corrosion but also serves as an electrocatalyst to expedite the otherwise sluggish water-splitting reaction,” said Mr. Dai.

Using this, the researchers were able to split water for a continuous 24 hours with no sign of corrosion.

The research then introduced another element into the mix, adding lithium to the water and potassium borate electrolyte solution. The lithium improved and stabilized the performance of the electrodes, allowing for the generation of hydrogen for 80 hours.

“A lithium addition to electrolytes has been used to make better nickel batteries since the Thomas Edison days. Many years later we are excited to find that it also helps to make better water-splitting devices,” said Mr. Dai.

The scientists plan to do additional work on improving the stability and durability of nickel-treated electrodes of silicon as well as other materials.

Other authors of the study are Ming Gong and Yanguang Li (co-lead authors), Justin Z. Wu, Ju Feng and Mario Lanza, all formerly or currently affiliated with the Dai Lab at Stanford. – EcoSeed Staff