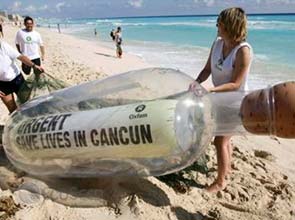 The United States and China, the world’s largest economies and top greenhouse gas emitters, have accused each other of doing little to combat global warming in 2010, contributing to deadlock in the U.N. talks among almost 200 nations.

«We have spent a lot of energy in the past month working on those issues where we disagree and trying to resolve them,» said Jonathan Pershing, heading the United States delegation at the talks in Cancun.

«My sense is that we have made progress … It remains to be seen how this meeting comes out,» he said.

The talks, in a tightly guarded hotel complex by the Caribbean with warships visible off the coast, are seeking ways to revive negotiations after the U.N. Copenhagen summit failed to agree to a binding treaty in 2009.

The United Nations wants agreement on a new «green fund» to help developing nations as well as ways to preserve rainforests and to help the poor adapt to climbing temperatures. The meeting will also seek to formalize existing targets to curb greenhouse gas emissions.

«We’ve had a very candid, very open dialogue with our U.S. friends and I think both the U.S. and China would very much like to see a good outcome at Cancun,» he told Reuters.

Climate is one of several disputes between the two top economies, along with trade and exchange rates. Preparatory U.N. climate talks in China in October were dominated by United States-Chinese disputes.

Mr. Pershing said President Barack Obama was committed to a goal of cutting United States greenhouse gas emissions by 17 percent from 2005 levels by 2020 despite Republican gains in November elections.

Earlier, the talks opened with calls for action to avoid rising damage from floods, droughts, heat waves and rising sea levels. The talks will draw more than 100 environment ministers next week and about 25 prime ministers and presidents.

Rajendra Pachauri, head of the U.N. panel of climate scientists, said: «Delays in action would only lead to impacts which would be much larger and in all likelihood more severe than we have had so far.»

He said costs of containing global warming, by switching from fossil fuels toward renewable energies such as wind or solar power, would rise the longer the world waited.

The Alliance of Small Island States warned that that some low-lying countries, such as Tuvalu or the Maldives, were facing «the end of history» due to rising sea levels. It urged far tougher targets for limiting climate change.

The talks are seeking to find a successor to the United Nations’ existing Kyoto Protocol, which obliges rich nations except the United States to cut greenhouse gas emissions by an average of 5.2 percent below 1990 levels by 2008 to 2012.

Kyoto backers say they will only deepen their cuts, shifting from fossil fuels to clean energies like wind and solar power, until 2020 if the United States and big emerging economies led by China and India take on binding curbs.

Success would help get the talks back on track after the acrimonious Copenhagen summit agreed to a non-binding deal to limit a rise in world temperatures to 3.6oF (2oC) above pre-industrial times.

Failure would raise questions about the future of Kyoto, which underpins prices in carbon markets. Unless a new round is negotiated, Kyoto will end in 2012, leaving a patchwork of national measures to combat climate change.

«The stakes in Cancun are high. In the run-up to Copenhagen there was perhaps too much hype, and expectations were too high. Now we must avoid the opposite, that the bar is lowered too much,» Danish climate minister Lykke Friis said.