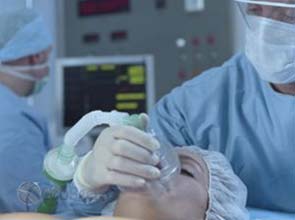 The study shows that 1 kilo of anesthetic gas affects the climate as much as 1,620 kilos of carbon dioxide. In fact, its global warming potential is as high as HFC-134a, a refrigerant that is on their way to be banned in the European Union.

The research team analyzed three gases regularly used in anesthesia and discovered that while they are not equally harmful, they are significantly worse than carbon dioxide. Isoflurane and sevoflurane have a global warming potential of 210 and 510, respectively. The most harmful of the three gases, desflurane, causes 1,620 times as much global warming as an equal amount of carbon dioxide.

The report says that although the amount of gas needed for a single surgical procedure is not high, surgery-related anesthetics affect the climate as much as would 1 million cars.

“This ought to make anesthesiologists sit up and take notice,” said Ole John Nielsen, a professor of atmospheric chemistry at the University of Copenhagen

“If all three compounds have equal therapeutic worth, there is every reason to choose the one with the lowest global warming potential,” he added.

The idea for the study came to Mads Anderson of NASA’s Jet Propulsion Laboratories while his wife was in labor.

“The anesthesiologist told me, that the gas used is what we chemists know as a halogenated compound,” he narrated. “That’s the same family of compound as the Freon that was famously eating the ozone layer back in the eighties.”

But while HFC-134a is considerably a lesser threat to the environment than freon, it is also being prohibited all across the European Union, and isoflurane and desflurane are in danger of being banned as well. The study shows that sevorflurane should be the only legal anesthetic gas.

“The surprising properties of anesthetic gasses are an important reminder to anyone using any kind of gasses,” Mr. Nielsen noted. “They really ought to examine the atmospheric fate of them, before releasing them into nature.”

The team’s findings were published in the medical journal British Journal of Anaestecia.