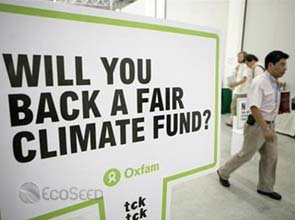 The climate deal forged among more than 190 countries at the annual United Nations talks in Mexico’s Cancun beach resort on Saturday included agreements on measuring emissions, technology transfer and $100 billion in financing for developing countries from 2020.

A Green Climate Fund would help channel some of that aid.

The $100 billion in financing, contingent on developing countries helping to fight emissions and being transparent about it, came on top of a pledge made at last year’s talks in Copenhagen for fast-start financing of $30 billion for 2010 to 2012.

Four Republicans in the U.S. Senate – James Inhofe, John Barrasso, David Vitter and George Voinovich – have opposed the fast-start financing, saying the money should be spent on easing the deficit.

The State Department said the United States spent $1.7 billion in fiscal year 2010 on climate change mitigation and adaptation projects in developing countries, and President Barack Obama has asked Congress for $1.9 billion in fast-start financing for 2011.

«The fiscal situation is extremely tough in the U.S., it’s tough in Europe and other places as well, and we are going to have to do the best we possibly can to carry out and make good on the fast-start pledge made in Copenhagen and reiterated in Cancun,» Mr. Stern told a news conference.

In the slightly longer term, countries will have to figure out how to put together the $100 billion in financing from both private and public sources, Mr. Stern said.

The idea of the long-term financing was also launched last year in Copenhagen. Some of the money had been expected to come from robust carbon trading markets, but the United States climate bill, which would have launched such a market, died in July.

Mr. Stern said he expected the Major Economies Forum, a group of the largest climate polluters, would hold meetings next year to work on the Cancun agreements. But he did not know yet exactly when they would meet.