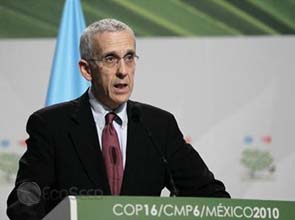 Todd Stern said Washington did not expect a legally binding deal at U.N. climate talks in South Africa late this year. Many countries have lowered ambitions after a summit of world leaders failed to agree a treaty at a 2009 summit in Copenhagen.

«When the time is right, a legal agreement would be a good idea, and we are for it,» Mr. Stern told reporters during a visit for talks on global warming with South African officials.

«But I don’t at all think that what we are doing now, in the period that is not in a legally binding structure, lacks value or meaning or import,» he said.

The U.S. Senate opposes cuts in U.S. emissions favored by President Barack Obama. That, in turn, has undermined other countries’ enthusiasm for pressing ahead with cuts in emissions, mainly from burning fossil fuels.

The South African coastal city of Durban hosts this year’s U.N. Conference on Climate Change from November 28 to December 9, but Mr. Stern said a treaty looked out of reach. «If we are wrong, we are prepared to go forward,» he added.

Mr. Stern said a pragmatic solution for now would be voluntary goals for some major emitters and looking at a global legal deal when all the major players are ready to sign.

Major emerging economies led by China and India do not want to commit themselves to a legally binding deal while the world’s biggest economy, the United States, has not signed the U.N.’s Kyoto Protocol, which obliges almost 40 industrialized countries to cut greenhouse gas emissions.

Governments are looking at ways to keep the protocol going beyond 2012 in some form to defuse a standoff between rich and poor nations that threatens efforts to tackle global warming.

Japan, Russia and Canada have said they will not extend cuts under the protocol beyond 2012, instead wanting a new treaty with targets for all major emitters. China and India say that Kyoto countries must take the lead and extend the pact.

In the United States, environmentalists are worried that the Republican-controlled House of Representatives could hurt the ability of Obama’s Democratic administration to fight climate change.

Mr. Stern said the winds have changed in Washington, making it more difficult to win approval for emissions-reduction legislation, seen as adding costs to businesses.

But he expects to find support in Congress for Obama’s clean energy plans.