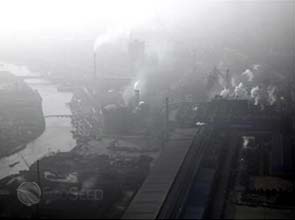 This was the first time a top Chinese leader had spelled out the nation’s energy and carbon «intensity» goals for its new five-year development plan.

China is the world’s biggest emitter of carbon dioxide, the main greenhouse gas from using fossil fuels that is stoking global warming. The goals for 2011-2015 set out by Mr. Wen are generally in step with the government’s pledge to cut carbon intensity by 40 to 45 percent by 2020, relative to 2005 levels.

The targets appear to be on the lower side of what some experts and officials have proposed, but Mr. Wen said they would nonetheless be demanding.

«These targets must be achieved through serious work,» Mr. Wen said on an online forum answering questions from citizens, which was organized by China’s official Xinhua news agency.

The targets will be approved by China’s parliament, which will start its annual full session late next week.

An intensity target means that while China’s total energy-use and carbon dioxide emissions will keep growing as its economy expands, the amounts used for producing each unit of G.D.P. will shrink.

China said last month it had met its target to cut the amount of energy produced per unit of G.D.P. growth by 20 percent over the 2006-2010 period.

The Chinese government has also pledged to increase the proportion of non-fossil fuels in overall primary energy use to 15 percent by 2020.