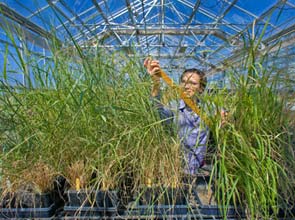 At the 2011 Annual Meeting of the American Association for the Advancement of Science, California and its emission reduction goal of 80 percent below 1990 levels by 2050 were discussed in a session titled “Portraits of the California Energy System in 2050: Cutting Emissions by 80 Percent”.

Given that energy demand is projected to double by 2050, the experts agree that an overhaul to the state’s energy systems to focus on low-carbon electricity is necessary to achieve its greenhouse gas emission goals.

Maximizing low carbon electricity options would have a special emphasis on renewable, but the experts also touched on the idea of nuclear as well as the possibility of combining fossil fuels with carbon capture and sequestration.

“It is difficult to say today which of these options is the best way to go and in the end it will probably be a combination of all of them,” said Jeffery Greenblatt, an energy analyst with the lab’s Environmental Energy Technologies Division.

All forms of low-carbon electricity generation would come with certain challenges that would make it unwise to rely on them as the sole provider for the state’s energy needs. Mr. Greenblatt pointed out these challenges during a presentation titled “California’s Energy Future: Low Carbon Electricity and Load-balancing.”

With nuclear, the problems would be disposal of radioactive waste as well as public acceptance. For fossil fuels with C.C.S., the question would arise as to where to safely sequester the carbon. For renewables, the challenge would be ensuring that the grid is capable of handling the power fluctuations inherent to the system.

In the end, diversifying the sources of low-carbon electricity is not the only answer, but the state must also increase the efficiency of its energy use.

In his presentation, “Holding the Line on Energy Demand”, James McMahon, head of the lab’s Energy Analysis Department pointed out that discussions about energy tend to focus on supply and not enough on demand.

Mr. McMahon presented various strategies for reducing energy demands of buildings and industry. In all cases, modifying behavior was cited as an important strategy for reducing demand.

This would include modest behavioral changes such as less reliance on electronic and mechanical devices for entertainment and minor tasks, and a convergence of electronic products to reduce the total number of display screens required.

Mr. Greenblatt also presented a case for energy efficiency in his second talk during the session entitled “Putting Together an Energy System Portrait for California”. Mr. Greenblatt called for action in four areas including demand, efficiency, electrification, and low-carbon fuels.

To reach just 60 percent below 1990 greenhouse gas emissions levels by 2050, Mr. Greenblatt recommended such actions as increasing building efficiencies, shifting to electrified heating, reduction in truck and aviation fuel use, significant reductions in liquid and gaseous fuels, and a doubling of electricity production.

To reach the 80-percent reduction goal, according to Mr. Greenblatt, would also require a doubling of the current supply of biomass in order to use this combined with other low-carbon fuels to generate electricity.

Also required would be a combination of zero-emission load following, net-zero greenhouse gas emission biomass, hydrogen use where practical and C.C.S. or the elimination of fossil-fuel generated electricity.

The talk “Potential for Sustainable Biofuels in California: Opportunities and Issues”, focused on the idea that while sustainable low carbon fuels are essential, there are problematic uncertainties in the life cycle analysis of biofuels.

“We also need better data on the feedstock crops from which future biofuels will be produced,” she pointed out.

While there are a number of barriers to implementing biofuels on a significant scale in California, the biggest, Ms. Youngs said, are the risk aversions arising from market uncertainties, and the amount of land and water in the state that could be made available for the production of biofuel crops.