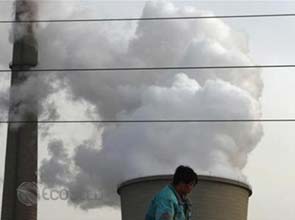 The plan for 2011-2015 will include new directives aimed at reversing the damage done by 30 years of untrammeled growth, and it will also aim to give a fillip to clean and renewable energy.

The challenges were put in stark focus in an essay by environment minister Zhou Shengxian on Monday.

«The depletion, deterioration and exhaustion of resources and the deterioration of the environment have become serious bottlenecks constraining economic and social development,» he wrote.

China, the world’s biggest source of climate change-inducing greenhouse gases, will put the reduction of carbon dioxide emissions at the top of its agenda.

Beijing has already pledged to reduce carbon intensity – the amount of carbon dioxide produced per unit of economic growth – by45 percent by 2020 from 2005 levels.

It also aims to raise the share of renewables to 15 percent of the country’s total energy mix.

«The targets will not be as ambitious as we hoped, because the 2020 targets aren’t that ambitious,» said Ailun Yang, China campaign manager with Greenpeace.

«I would put much more emphasis on the detailed measures, which are much more important than the targets themselves.»

Detailed targets will emerge in the coming months as individual industries issue their own five-year plans.

The government wants to clean up heavy industries such as steel and aluminum, encourage non-fossil fuels, cut nitrogen oxide emissions and improve water and air quality.

Premier Wen Jiabao said last month China would cut energy and carbon intensity by 16-17 percent over the 2011-2015 period, less of a challenge than the 17.3 percent figure suggested last year.

Experts say energy intensity – the amount used per unit of G.D.P. – needs to fall by 20 percent to achieve an 18 percent cut in carbon intensity, but Mr. Wen did not make the distinction.

Yang Fuqiang, director of global climate solutions at the Worldwide Fund for Nature, said cutting carbon intensity by less than 17 percent was little more than «business as usual.»

«There is a game being played by the central and local governments, and if the central government adopts 16 percent they will lose their authority because it shows that ‘government orders don’t go beyond Zhongnanhai’,» he said, referring to the Chinese Communist Party headquarters in Beijing.

Mr. Yang said a 16 percent cut could allow China to hit the 40 percent carbon intensity goal by 2020, while an 18 percent cut would take it toward the higher 45 percent target.

A commitment to use market mechanisms in the fight against climate change is also expected, with a number of provinces keen to launch pilot emissions trading programs. Detailed plans will emerge later this year.

Analysts have said China might consider an absolute energy consumption cap over the 2011-2015 period, and draft policies to restrict coal production to 3.6-3.8 billion tons by 2015 have also been leaked to the local press. Provinces such as Guangdong might impose their own energy caps to stimulate city-to-city emission trading, but government researchers have dismissed the idea of a national limit.

«There are no such plans,» said Zheng Shuai, researcher at the Energy Research Institute of the National Development and Reform Commission, but added some academics have proposed Beijing implement a limit on fossil fuel use without imposing an overall cap on energy use.

«This is more realistic because it will allow and encourage the use of renewable energy,» Mr. Zheng said.

China is desperate to improve its depleted, contaminated rivers, which have been blighted by a spate of burst tailings dams, untreated chemical discharges and plant explosions in the past five years.

In 2009, nearly 20 percent of the length of China’s major rivers and lakes were judged unfit even for irrigating crops, according to government figures.

Environment minister Zhou said Beijing will aim to cut 2007 levels of heavy metal discharges in key regions and industries by 15 percent in the next five years.

«We understand thousands of key heavy metal polluters will be put under tightened monitoring and this is important,» said Ma Jun of the Institute of Public and Environmental Affairs, a nongovernment organization that monitors water pollution.

«But there is a lack of transparency and we believe public scrutiny could generate the motivation to cut their emissions.»

«We expect to see more action on that but I still believe that the first step is pollution,» said Mr. Ma.

«The huge volume of wastewater discharge is destroying our very limited clean water resources and if we continue to allow that we cannot talk about recycling and conservation.»

But the commitment to cleaning up rivers could be undermined if binding carbon targets lead to a renewed drive for large hydropower dams and reservoirs throughout China.

The five-year energy sector plan is expected to back controversial hydropower plants on China’s Nu River, also known as the Salween. Previously untouched rivers in Tibet may be next.

«We need to realize that large hydro by itself has such a large environmental impact that it shouldn’t be considered a renewable energy,» said Mr. Ma.

«In 2004, China overtook the United States as the world’s largest hydropower capacity but the plan is to more than triple that by 2020 – that means in many of our rivers there won’t be running water.»