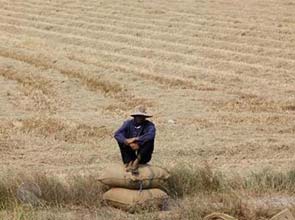 High and volatile food prices are a growing global concern, partly fuelling the protests that toppled the rulers of Tunisia and Egypt this year. The aftershocks have been seen across North Africa and the Middle East from Algeria to Yemen.

Periods of price volatility are not new to agriculture, but recent price shocks triggered by extreme weather and increasing use of grains to produce energy have caused great concern, the United Nation’s Food and Agriculture Organization said.

«There are fears that price volatility may be increasing,» the F.A.O. said in its State of Food and Agriculture report

The Rome-based F.A.O. has already warned food-producing countries against introducing export curbs to protect local markets as world food prices push further above the levels that triggered deadly riots in 2007 and 2008.

A declining stock to utilization ratio for major grain stocks like wheat and maize is a concern, said Kostas Stamoulis, director of Agricultural Development at F.A.O.’s economics unit.

«We worry about this,» Mr. Stamoulis told Reuters on the sidelines of the presentation of the report.

«As prices increase, governments and others are trying to reduce their stocks to soften the impact of decreased supplies. This is one of the factors causing high prices … If there is another supply shock very soon, like in China for example, then the shock will happen amidst low stocks.»

Food prices are projected to rise over the next decade and stay at levels on average above those of the past decade, the agency said on Monday.

Urgent coordinated international action is needed to ensure security of food supplies, including improvement of market regulation and transparency as well as of statistics on food commodity markets, establishment of emergency stocks, and provision of safety nets, the F.A.O. said.

The number of undernourished people in the world has fallen to 925 million people last year from an estimated 2009 peak of 1.023 billion, but it remained unacceptably high, the F.A.O. said.

In 2010, 16 percent of developing countries’ populations were undernourished, down from 18 percent in 2009 but still well above the United Nation’s Millennium Development Goal to halve to 10 percent the share of the hungry between 1990 and 2015, it said.

The number of hungry people could fall by 100-150 million people if women farmers were given the same access to production and financial resources as men, the agency said.

The yield gap between men and women farmers averages around 20-30 percent, mostly due to differences in resource use, the report said, citing industry studies.

Farm output in developing countries could rise by 2.5-4 percent if yields on the land farmed by women increased to the levels achieved by men. That in turn would reduce the global number of undernourished people by 12-17 percent, it said.

«We must eliminate all forms of discrimination against women under the law, ensure that access to resources is more equal…and make women’s voices heard in decision-making at all levels,» F.A.O.’s director- general Jacques Diouf said in the report.

«Women must be seen as equal partners in sustainable development,» he said.