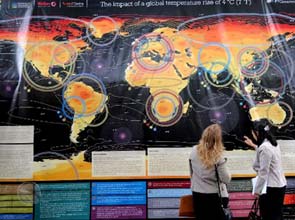 The commission scaled up a non-binding goal of 20 percent to 25 percent by 2020 in the recent “Climate Roadmap to 2050”, detailing how it will reduce greenhouse gas emissions by the middle of the century.

The roadmap contains the plan to set aside million of tons of emission permits in the carbon market from 2013 to 2020 to attain a 20-percent energy efficiency goal and thus meet the 2020 target.

The commission calls for the 27 member states to align their national policies to its new proposals. A sector-specific roadmap for the energy sector is due in October.

Environmental groups and lawmakers call for a more ambitious 30 percent target that will place them in the forefront of the fight against climate change.

“The Commission has today presented a ‘plan’ for inaction on energy efficiency in the E.U. Given the plan is little more than an empty shell with no new, meaningful, concrete EU measures on energy efficiency being proposed, it is hardly surprising that [Energy] Commissioner [Gunther] Oettinger dropped the word ‘action’ from the title of the document,” said Greens-European Free Alliance spokesperson Claude Turmes.

«The proposals presented by the Commission today would set the E.U. on the wrong road for its climate policy up to 2050,” added Bas Eickhou, another member of Greens-E.F.A.

“If the E.U. follows the path laid out in the roadmap, it will neither reap the benefits of the emerging global clean and green economy nor will it inspire other countries to more ambitious climate policies.”

Similarly, Satu Hassi from Greens-E.F.A. said the roadmap delays action instead of taking measures to keep the global temperature from rising to two degrees Celsius.

Oslo-based environmental group Bellona Foundation said the commission agreed to a disappointing 25-percent target that is insufficient to boost investments in clean technology.

In July 2010, ministers from Britain, France, and Germany issued a joint call for the E.U. to raise its emissions reduction target to 30 percent by 2020. A similar appeal was released by 29 European companies three months after.