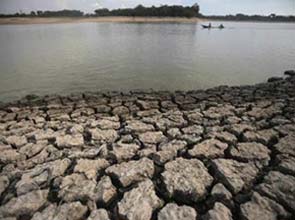 Failure to do risked scuttling drawn-out and often fraught negotiations on ways to slow the growth of planet-warming greenhouse gas emissions and avoid greater extremes of weather and rising sea levels.

The talks in Bangkok formally began on Tuesday and are the first major session after talks last December in the Mexican resort of Cancun ended with a series of agreements on a $100 billion climate fund and other steps, such as a scheme to transfer clean technology for poorer nations.

But Cancun put off the tougher issue over the fate of the Kyoto Protocol, which binds nearly 40 industrialized nations to emissions targets during its 2008-12 first phase.

The April 3-8 Bangkok meeting is meant to expand on the Cancun agreements but arguments over Kyoto’s future risk overshadowing progress.

«It is essential to find a way forward on this issue, which is particularly pressing given the growing possibility of a gap after 2012,» U.N. climate chief Christiana Figueres told delegates.

The tiny Pacific island state of Tuvalu, which faces being wiped off the map by rising seas, urged the meeting to focus solely on the future of the 1997 Kyoto Protocol.

He urged nations that did not support an extension of Kyoto to leave the room, triggering applause.

Japan, Canada and Russia say they are opposed to extending the pact from 2013, saying all major emitting nations be brought under a new and broader legally binding agreement. This includes the United States which never ratified Kyoto and says it will never join it.

Developing nations say Kyoto is the only legally binding instrument and rich nations must boost their pledges to help the world stay below an average rise of 2 degrees Celsius, a pledge nations agreed to in Cancun.

Under Kyoto, developing nations only have to take voluntary steps to curb emissions growth from industry. They are firmly opposed to taking any targets and say they must let their economies grow to lift millions out of poverty.

Impatience is growing during the talks, which began with a series of informal workshops on Sunday, with poorer nations pointing to the increasing impact of climate change, such as storms, droughts and crop failures.

The Cancun meeting put off a decision on Kyoto until a major meeting at the end of this year in Durban, South Africa.

But the United Nations fears no decision will be taken on the shape of a new pact at those talks, almost certainly leading to a gap between the end of Kyoto’s first phase at end-2012 and any future agreement.

This is a major worry for investors because there will be no certainty on how a $20 billion carbon market under the Kyoto Protocol would function. The market also underpins billions in investments in clean energy projects in poorer nations.

Australia, on behalf of an umbrella group of nations including Japan, Russia and Canada, said group members were «all committed to be part of a balanced, environmentally effective and comprehensive global deal.»

But Dessima Williams of Grenada, speaking on behalf of a 43-member alliance of small island states, said it was time for rich nations to show if they had the appetite to deepen their emission cut pledges.

The United Nations says the pledges on the table are far below what is needed to have a medium chance of avoiding a 2 degrees Celsius rise.

«To KP or not to KP is not the question,» Saudi Arabia told the meeting, referring to the Kyoto Protocol, adding the world had repeatedly missed chances to decide on the shape of new climate pact.