New Jersey backs out of cap-and-trade, calls R.G.G.I. a ‘failure’ 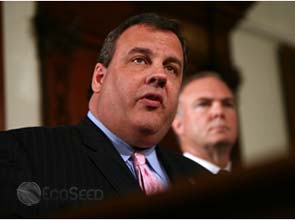 In a press conference last week, Mr. Christie, a Republican, acknowledged the effects of human activity that lead to rising global temperatures. But he said the Regional Greenhouse Gas Initiative, the only functioning cap-and-trade program in the United States, was failing to address the problem.

«This program is not effective in reducing greenhouse gases and is unlikely to be in the future,» Mr. Christie said. «The whole system is not working as it was intended to work. It’s a failure.»

As in similar schemes, power plant operators buy allowances which represent a ton of carbon dioxide in quarterly auctions. They can also trade extra allowances with each other to cover the carbon they emit, a method known as cap-and-trade. Revenues from the sale of the allowances are meant to be used to pay for low-carbon energy improvements such as renewable energy and energy-efficiency.

R.G.G.I Inc., the nonprofit managing the program, has issued a statement insisting that its next planned auction of emission allowances on June 8, the 12th so far, will continue as planned.

“Based on information provided by the state of New Jersey, the participating states will evaluate how New Jersey’s proposed withdrawal might affect New Jersey allowances currently in circulation.”

The governor’s criticism of the R.G.G.I. echo that of some groups like the United States Climate Action Partnership, which have argued that the failure to impose higher allowance prices will likely fail to deliver significant cuts in emissions.

Mr. Christie said the industry in 2005 expected the cost of allowances to reach as much as $20 to $30 a ton. Currently less than $2 per ton, “allowances were never expensive enough to change behavior as they were intended to and ultimately fuel different choices,” the governor said.

An R.G.G.I. report released in February 2011 noted that participating states have invested 80 percent of allowance proceeds, creating a pool of more than $860.9 million that ideally could be spent on renewable energy initiatives.

New Jersey generated $102 million from sales of pollution allowances in 10 quarterly auctions it participated. This was divided in a number of ways – including New Jersey’s recent withdrawal of $65 million to balance the 2011 state budget, the R.G.G.I. report said.

In 2010, New Jersey gave out $29.6 million in allowance proceeds to 12 large-scale energy efficiency and renewable energy projects through zero-interest loans and grants. The programs were designed to create around 167,000 megawatt-hours of clean power to meet the demands of more than 19,600 New Jersey households each year. It should also have discarded 1.7 million tons of carbon dioxide over the projects’ lifetime.

But in the news conference, Mr. Christie said the program was nothing more than a tax.

“RGGI does nothing more than tax electricity, tax our citizens, tax our businesses, with no discernable or measurable impact upon our environment,» saying stringent caps could force good-performing New Jersey plants to close, only to be replaced by power from Pennsylvania coal plants. Pennsylvania is not a member of the program.

Democrats whose states are members of the R.G.G.I., meanwhile, gave a list of benefits they have earned from being loyal to the program.

“Governor Christie is simply wrong when he claims that these efforts are a failure. Here in Maryland, R.G.G.I. has avoided dangerous carbon dioxide emissions in Maryland equivalent to taking nearly 3,500 cars off the road,” Maryland Governor Martin O’Malley said in a statement.

“I am disappointed in Governor Christie’s decision to withdraw from R.G.G.I. and I reject his assertion that the initiative is ineffective in reducing greenhouse gases,” Mr. O’Malley said, adding the state raised $162.4 million last year through the program.

In Connecticut, allowance sales raised over $45 million for energy efficiency and renewable energy programs. It created nearly 7,000 jobs, reducing the energy consumption of 34,000 residential customers and generating more than $137 million in employment income.

“This is a good program for Connecticut and the rest of the states in the partnership and we hope that Governor Christie will reconsider his decision,” Connecticut governor Dannel Malloy said in a statement.

Mr. Christie is the latest Republican to announce that his state will no longer participate in a voluntary regional program to reduce the gases linked to global climate change.

Republicans brought to state office in the West and the Midwest have been reconsidering their states’ participation in a similar program called the Western Climate Initiative, led by California.

“The planet is not a political football – we need serious, stable, and long-term policy in place to reverse our climate impact. That is why I think Governor Christie’s decision to abandon R.G.G.I., a cornerstone of that policy, is wrong,” Governor Peter Shumlin of Vermont said.