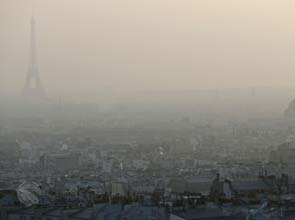 Warm, still conditions have caused car fumes and chemicals to collect above the city and the Air Quality Index (AQI) has risen to 185 – currently higher than the world’s most polluted cities – including Beijing. To put that figure into perspective, an AQI of 150+ is classified as unhealthy and at its worst, Beijing clocked up an AQI of 500 last year – classified hazardous.

In a bid to combat air pollution, Parisian authorities have produced an interesting solution.

Commuters are only allowed to drive in the city on alternating days – dictated by odd and even number plates. There are exceptions, withthe government naturally favoring electric vehicles and hybrids for their clean energy. To encourage car sharing, vehicles with at least three people on board are allowed to drive in the city but all trucks are banned.

Parisians have resisted the ruling, calling it “idiotic.” Many people rely on their cars for the morning commute and the immediacy of the measure has caused chaos on the roads. This is exacerbated by the fine for noncompliance, which is only €22 ($30) – a cost many people are willing to incur if it means getting to work on time.

Fingers are pointing left, right and center but it’s generally considered that car-owners in Parisian suburbs are the worst offenders. After all, transport links inside the city are hugely efficient. With more than 1.5 billion passengers a year, the Paris Metro is one of the busiest city-rail services in the world.

Joanna Robertson, a long term resident of Montparnasse in central Paris, told the Guardian that the driving ban has not noticeably reduced traffic on the roads. “The smog-cloud is far less visible today but the air quality remains very poor. I’m still coughing from the morning school-run (ten minute cycle each way) four hours ago. My daughter, aged 8, has been coughing and sneezing and wheezing for the past week.”

Regarding the congestion, she said, “There are still the same number of cars on the road as on an average Monday and the general consensus amongst my neighborhood Parisians is that all in confusion – not enough information, alternate days based on number plate ‘odd and even’ unenforceable and the fine – €22- not nearly enough to deter anyone.”

She continued: “As a quote from an interview in the popular free morning daily paper ‘20 Minutes’ points out this morning – ‘Pay 22 euros or miss a day’s pay from missing work? The choice is obvious.’ I haven’t seen one police officer checking cars and they can’t possibly carry out the threat to clamp parked vehicles as they have no proof if they were driven-in today or not. With free transport, one-hour free electric car scheme hire and free Velib bicycles – still, no-one’s listening. And lots of non-driving residents are very angry indeed.”

Why is pollution so rife in the capital?

The French Huffington Post blames the government’s post-war rural development policies. After the Second World War, the cost of diesel for farm machinery was significantly reduced to stimulate the economy through agriculture.

Taxes levies were eased and, thanks to powerful corporate diesel lobbying, continue to be eased. So much so that in 2011, 70% of French car sales were diesel- a huge market disparity in comparison to Germany’s 47%.

Although diesel engines were seen as a way to reduce carbon emissions, recent findings have led to questions about whether it is a viable transport alternative at all.

Although diesel generates less CO2, it causes more pollution than petrol and the fumes are much more damaging. In 2012, the World Health Organisation (WHO) found that diesel fumes are carcinogenic –they cause cancer.

Emily Buchanan is a digital editor, blogger and writer living in Norwich, UK. As an ardent environmentalist, her specialities include sustainability, conservation and global politics. In the last few years, she’s been published by the Ecologist, UNICEF, Blue & Green Tomorrow and Project Noah. For more information and regular updates, follow Emily on Twitter.