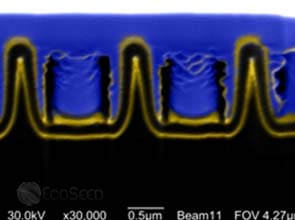 They said this design provides a solution to the “thick and thin” challenge inherent to harnessing current for solar energy.

Thin-film solar cells are largely characterized by low power conversion efficiency compared with conventional silicon wafer cells due to competing optical and electronic constraints. In order to be effective, a cell must be thick enough to collect a sufficient amount of light, yet be thin enough to extract current.

The Boston College researchers reported in the current online edition of the journal Physica Status Solidi that they used nanoscale solar architecture based on the coaxial cable to circumvent this problem.

The coaxial cable is an electrical cable with an inner conductor enclosed by a flexible, tubular insulating layer and tubular conducting shield. The cable, whose inner conductor and outer shield share the same geometric axis, are used as transmission lines for radio frequency signals.

The Boston researchers call their structure nanocoax. It stands thick enough to capture light, yet its architecture makes it thin enough to allow more efficient extraction of current.

The ultrathin nature of the cells reduces the Staebler-Wronski light-induced degradation effect, a major problem with conventional solar cells of this type.

Constructed with amorphous silicon, the nanocoax was patented last year as a new platform for low-cost, high-efficiency solar power.

“Many groups around the world are working on nanowire-type solar cells, most using crystalline semiconductors,” said co-author Michael Naughton, a professor of physics at Boston College.

“The nanocoax cell architecture, on the other hand, does not require crystalline materials and therefore offers promise for lower-cost solar power with ultrathin absorbers,” explained Mr. Naughton.

Through continued optimization, the researchers believe that efficiencies beyond anything achieved in conventional planar architectures may be possible with the nanocoax while using smaller quantities of less costly materials.

The research group’s other members are physics professors Krzysztof Kempa and Zhifeng Ren, the college’s own students, collaborators from Solasta Inc. and École Polytechnique Fédérale de Lausanne, Institute of Microengineering in Switzerland.

The research was funded in part by a technology incubator grant from the Department of Energy.