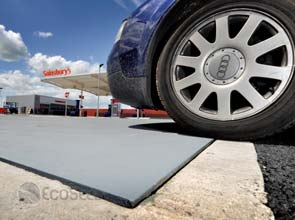 Energy, or the potential for creating it, is all around us. It is being tapped at an incredible rate from sources that are naturally replenished, such as sunlight and wind.

Most new kinetic energy research and development tends to focus on two possible power sources – human motion and vehicular traffic. There have been a number of exciting developments in each area.

At the Tokyo Station, one of the world’s busiest train stops, trials are underway with what are called Hatsudenyuka tiles which convert the pressure and vibration of commuter footsteps into electricity to power lighting. It is hoped that eventually the flooring will power the station’s other fixtures such as automatic ticket barriers and display panels.

The tiles feature piezoelectricity, the ability of some materials to convert applied strain to create electric potential.

At the University of Leeds in England, engineers are also looking at human feet power, but not just in people walking at their own pace; they are taking advantage of the pace of marching soldiers.

The “soldiers’ pace” helps eliminate one of the difficulties in harvesting walking power, which is the fact that normal walking patterns tend to be varied and different and may not always give the same amount of pressure needed to trigger the piezoelectric materials.

The Leeds devices use high-tech ceramics and crystals as piezoelectric devices to turn the pressure of footsteps into an electric charge.

The ultimate goal of the Leeds device is to create a renewable and portable source of energy, in this case for the army to reduce the burden of soldiers’ packs. The devices can be placed on the backpack straps or around the knees to capture energy when legs are bent, joints are compressed or boots strike the ground. Having these devices will help keep the weight of soldiers’ packs down as it does away with the need for batteries for their electronic gadgets.

These technologies are so far in trial runs, but others might just reach commercial success. Mobile phone company Orange, for one, has been testing kinetic motion charging devices for phones. These include a 180-gram charger the size of a pack of cards that users can strap to their bicep. The unit creates an electric current as users move their arms.

The device actually harvests more electricity through activities like dancing, and was featured in the Glastonbury Festival, the annual British rock concert.

But human-powered kinetic energy devices tend to be gimmicky and rather small, mostly because the source is not very reliable. The variations inherent in natural movement can cause some problems with the devices mostly because humans get tired eventually.

British grocery chain Sainsbury’s is looking to power their checkouts with kinetic energy using “kinetic road plates.” When cars drive over the plates, they create a rocking motion under the road surface which turns generators. The system, launched in Sainsbury’s Gloucester Quay store last year, is set up at the car park and is expected to produce 30 kilowatts of energy an hour.

The company New Energy Technologies, meanwhile, is banking on its MotionPower technologies. The company has two versions of its system. One can be triggered by the motion of cars and light trucks and another can be operated by heavier vehicles such as trucks and buses.

The system basically uses multiple treadles embedded in roads to resemble a rumble strip or a speed bump. When a vehicle passes over these areas, the tires press down the metal strips on the surface and the system converts this into electricity.
New Energy Technologies (OTCBB:
NENE
) recently announced that they are testing the heavy version of this system at Heller Industrial Parks’ flagship site in New York, one of the East Coast’s largest maritime cargo center and the third largest port in the United States. The constant influx of trucks and other commercial vehicles will give the company ample opportunity to monitor their system’s capabilities.

As new technologies in piezoelectricity and kinetic power harvesting develop, it is interesting to see how they will be incorporated in people’s daily lives.