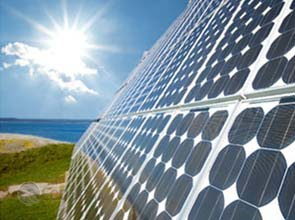 Researchers from the University of Minnesota have joined the solar nanotechnology bandwagon, armed with solar cells with a potential to have 66 percent efficiency.

When sunlight hits a solar cell, electrons are knocked loose from the atoms and converted to power. By coming up with “quantum dots,” the researchers captured energy in solar cells normally lost as heat, thus resulting in more energy being harvested and ultimately increasing the solar panel’s output

The quantum dot technique shows the construction of semiconductors, the main solar cell material which includes silicon, in small pieces only a few nanometers wide.

The researchers claimed that they have shown how energy lost as heat from solar cells can be captured by quantum dots.

“Theory says that quantum dots should slow the loss of energy as heat,” said William Tisdale, a graduate student who spearheaded the project. “And a 2008 paper from the University of Chicago showed this to be true. The big question for us was whether we could also speed up the extraction and transfer of hot electrons enough to grab them before they cooled.”

Mr. Tisdale and his colleagues have demonstrated the efficiency of quantum dots through the use of lead selenide, a semiconductor material.

They found that quantum dots could indeed be made to surrender their hot electrons before they cool. The electrons were pulled away by titanium dioxide, another common inexpensive and abundant semiconductor material that behaves like a wire.

But currently the work shows that the potential for building solar cells with efficiencies approaching 66 percent exists, the researchers said.

At the same time, the technology could also slash the cost of manufacturing solar cells by removing the need to process them at very high temperatures, opening a new avenue for less costly but more efficient solar energy devices.

This research caps six years of work begun at the university’s Institute of Technology with Xiaoyang Zhu and chemical engineering and materials science professors Eray Aydil and David Norris.

The research was funded by the United States Department of Energy and partially by the National Science Foundation.