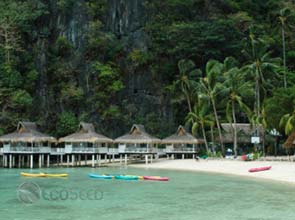 The southern Philippine province of Palawan does not only use a great tropical weather and abundant sunlight to attract tourists to its pristine beaches, but also to provide electricity to rural households in off-grid areas.

Local officials estimate that the expected rise in population will require a 100-megawatt increase in electricity demand. To address this, the local provincial government launched the solar home system development project in 2007 to provide solar installations in numerous communities in the province.

Beach resorts in the province – one of the Southeast Asian country’s top tourist destinations – followed suit and installed their own rooftop solar systems. Over at the Daluyon beach resort in Sitio Sabang at the provincial capital of Puerto Princesa and at the Boayan island resort, rooftop solar panels were installed to help provide hot water to guests.

Management at the Daluyon resort even implemented recycling and composting of biodegradables to contribute to local waste management. The resort also uses energy-saving bulbs and encourages guests to save energy by turning off air conditioning units and extra lighting when they leave their rooms.

Beach resorts in other islands in the Philippines are also trying to be greener. In Bohol, resorts are implementing wastewater treatment systems to protect the rich marine life in the island’s surrounding dive spots.

Meanwhile, Amarella Hotel in Panglao Island and Peacock Garden hotel in the municipality of Baclayon also installed solar panels on their rooftops.