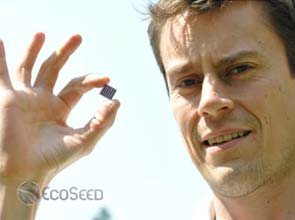 Researchers from the University of Alberta and the National Institute of Nanotechnology in Canada have discovered a way to extend the lifespan of an unsealed plastic solar cell to eight months.

A functional plastic solar cell can be a stepping stone for the next generation of photovoltaic products, such as solar power-generating fabrics, and can also allow photovoltaics to be integrated better into building materials.

“Inexpensive, lightweight plastic solar-cell products, like a blanket or sheet that can be rolled up will change the solar energy industry,” said David Rider, a chemistry researcher in the university.

However, one stumbling block in the development of plastic solar cells is their limited operating life, which usually lasts only mere hours.

The problem involves electrodes, an essential piece of circuitry necessary for the efficient extraction of electricity from the solar cell.

“A typical electrode priming coating is known to be unstable and can migrate through the circuitry, potentially limiting the performance of our cell to about 10 hours,” said Mr. Rider.

To get past this hurdle, the researchers developed a new polymer coating that outlasted the original design by more than 5,000 percent. By the time the team submitted their findings to a science journal, the new cell had clocked 500 hours of performance.

However, the solar cell was damaged during return shipping from additional testing in Ottawa. Still, Mr. Rider believes that the solar cell would have still been working at high capacity had it not been broken.

Despite the team’s success and advances made by research groups around the world, Mr. Rider thinks that additional research is needed before plastic solar cell kits will reach the shelves of home improvement stores.

“We have to increase their efficiency while maintaining a long-performance life,” he explained. “Getting eight months of high-capacity performance out of our design is moving in the right direction.”