G.E. puts direct-drive wind turbines to the test in Europe 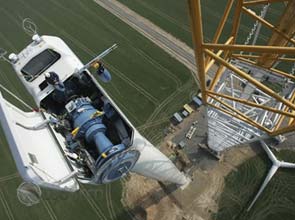 General Electric Company plans to install five units of gearless wind turbines off Norway’s coast, and another one on land in Sweden, marking the latest innovation in turbine technology development.

Gearless, direct-driven turbines do not have a gearbox, which provides the mechanism for multiplying the speed of the rotation of the shaft. The shaft is connected to the turbine blades which are driven slowly by wind current.

A number of wind turbine manufacturers believe that direct-driven systems will replace gearboxes in the future since it can do the same task more efficiently using a smaller number of parts. With fewer moving parts, the design reduces operating and maintenance costs, making electricity from wind farms more competitive.

G.E. will use its largest direct-drive wind turbine model, rated 4 megawatts, for its first four turbines in the southwestern Norwegian county.

G.E., the world’s second largest maker of wind turbines, is also planning to install direct-drive turbines on land in Gothenburg Harbor in Sweden in cooperation with Gothenburg Energy. This turbine is expected to be operational by 2011.

Victor Abate, vice president of G.E. power and water’s renewable energy business, said the projects will help them move to the next phase of their offshore strategy, with direct-driven technology on the forefront.

G.E. said it has invested 340 million euros ($415.6 million) in manufacturing facilities in four countries in Europe – Britain, Germany, Norway and Sweden – to build 4-MW gearless wind turbines for offshore use in 2012.
Last year, G.E. (NYSE:
GE
) acquired Norwegian turbine producer ScanWind, which has been testing gearless technology since 2003 off the Norwegian coast.

“We remain optimistic about the potential of the offshore wind industry, and we believe that our partnering strategy will increase our potential for growth in this sector, particularly in Europe where we see tremendous opportunities,” Mr. Abate said.

A recent Emerging Energy Research market study shows that global offshore wind capacity grew from 70 MW to 1.5 gigawatts over the past eight years. This is further expected to rise to nearly 45 gigawatts by 2020.

Much of that growth is expected to happen in Europe, particularly in Britain, whose offshore wind industry could be worth £75 billion ($112.8 billion) and could generate up to 70,000 jobs by 2020.

Britain’s offshore wind power potential has been developed through a series of competitive leasing rounds by the Crown Estate, which oversees the country’s seabed. The latest round awarded licenses for 25 GW worth of wind electricity in January to developers.