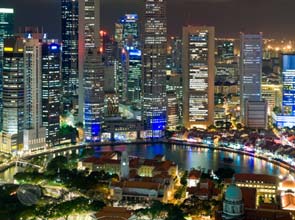 Singapore is eyeing to become the Southeast Asian leader in smart grid as the island nation embarks on building the region’s first experimental smart grid research center to the tune of 38 million Singaporean dollars ($27.63 million). Singapore’s lead government agency for science, the Agency for Science, Technology and Research, led the Experimental Power Grid Centre’s groundbreaking in Jurong Island on Friday. The facility will be operational by 2011.

Housing 15 scientists and researchers once completed, the center will do research on smart grids and how they can accommodate renewable energy. Vehicle-to-grid systems and better energy management will also be studied.

Singapore wants to be a “living laboratory” for global new energy technologies, including the smart grid which some analysts predict will become a $187 billion industry by 2015.

“Smart grid research and development is critical to transforming Singapore into a smart energy economy and [the center] is an important enabling infrastructure that will bring us a step closer to realizing an intelligent national energy grid,” said Lim Chuan Poh, chairman of the government science agency.

“A reliable grid is a key competitive advantage in attracting investments from around the world,” said Rave Menon, secretary at the Trade and Industry Ministry, citing Singapore’s grid system which has an average electricity interruption of less than one minute annually.

“But we too need to invest in research and development to further upgrade and improve our grid system, to meet the new demands on our grid,” he added.

Mr. Menon said the future grid must allow be capable of accommodating intermittent renewable energy power sources, such as solar energy, which are not predictable enough to be used in most existing power systems.

Consumers also demand more information and control of their energy use. These demands will necessitate new technologies and system-level solutions.

“We hope to anchor more companies to further shape the research and development agenda and to translate research into useful applications,” said Mr. Lim.

Collaboration between the center and the science agency could also leverage ongoing studies on biofuels and solid oxide fuel cells.