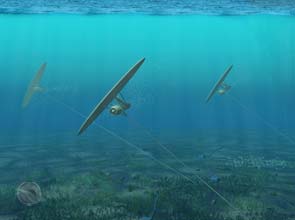 A Swedish startup has secured 2 million euros ($2.57 million) to test a prototype of an underwater kite that will harness tidal power in Northern Ireland next year.

Minesto A.B.’s Deep Green technology uses a turbine attached to a kite with a wing and rudder tethered 100 meters above the ocean floor. The kite steers the turbine to face in the direction that will allow it to capture the maximum amount of energy.

Minesto claimed the kite assembly can capture energy from tidal currents at 10 times the speed of the actual stream velocity. Once operational, the turbine can generate 500 kilowatts of power.

The company will test a scale model of the technology off the coast of Northern Ireland at Strangford Lough, County Down in 2011.

The Deep Green kite has a wing span of 12 meters but only weighs 13 tons to 14 tons, making it lighter and smaller than current tidal systems and cheaper to manufacture.

Electricity generation by the kite is estimated to be in the range of 0.06 euros to 0.14 euros per kilowatt-hour. The kite can operate cost efficiently at sites with low current velocities and large depths, sites where current tidal power generators cannot operate.

Studies reportedly indicate that the Deep Green kite is the only one that can utilize 40 percent of the high potential areas in a cost-efficient manner.

Minesto anticipates that a full-scale Deep Green kite will be commercially available within the next four years.

Although tidal power is more expensive than solar and wind, it unlocks a huge untapped resource with enormous market potential. Global market analyst Frost & Sullivan even estimated that the global ocean energy industry can be worth as much as $1 trillion.

However, the predictability of the tidal power will compensate for the initial extra cost because it provides a more reliable source of power than intermittent solar and wind energy.

Mineseto was formed in 2007 as a spin-off company of Saab A.B. to develop and commercialize tidal power generators. Saab, an aerospace and defense company based in Sweden, began the Deep Green project in 2003.