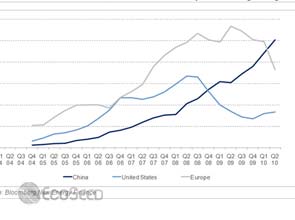 China’s booming sector made up for Europe’s dwindling project financing to keep steady global clean energy investment in the second quarter at $33.9 billion, which slipped by just 1.5 percent from the first quarter, according to Bloomberg New Energy Finance.

The quarterly total merely represented a 3-percent fall from the same period last year, despite the Greek credit crisis and sluggish economic recovery in the United States.

Years of unrestrained spending and poor financial reforms left Greece ill equipped to cope with the global recession. Its national debt, put at around 300 billion euros ($413.6 billion), is bigger than the country’s economy while its budget deficit is at 12.7 percent.

The country’s credit rating has been downgraded to the lowest in the euro zone, resulting in fears spreading throughout Spain, the second biggest solar market, Portugal and Ireland – countries also burdened by huge deficits.

China pulling ahead of Europe

China is quickly becoming a hotbed for clean-energy financing as it seized more investment for clean-energy in the second quarter than green technology veterans Europe and the United States combined.

The country attracted $11.5 billion in asset financing in the second quarter, a 9.6 percent increase over the prior quarter and a large 72.1 percent leap from the same period in 2009.

“[W]here investors are placing their bets is changing rapidly. China continues its extraordinary surge and Europe is now very much slumping based on the all-important project finance figures,» adds Mr. Liebreich.

Europe was first to deploy large-scale clean energy projects but is slowly losing its game as it has lost out to China in each of the last four consecutive quarters. China has attracted $40.3 billion in asset financing throughout that period while Europe managed to attract $29.3 billion.

Around $28.9 billion of the $33.9 billion investment in the second quarter was spent for new renewable energy generation projects. The figure is down by 2.1 from the first quarter and 3.7 percent year over year.

To compare, the S&P 500 Index fell by 11.6 percent during the quarter, coinciding with mounting concerns in the credit situation in Greece.

The WilderHill New Energy Global Innovation Index, a compilation of over 80 stocks from the clean energy sector, however, dropped 19.5 percent in the second quarter of 2010.

Bloomberg New Energy Finance estimates that the three firms could have collectively taken in about $6 billion if their respective public offerings pushed through.

The largest I.P.O. of the quarter was from China-based battery maker Zhejiang Narada Power Source, which successfully raised $300 million on the Shenzhen Stock Exchange.
It is followed by Tesla Motors’ (Nasdaq:
TSLA
) successful $202 million stock debut in June on the Nasdaq after pricing its shares above a previously announced value. The company also collected $50 million from a recent partnership with Toyota Motor Corporation, its new technology partner.

Venture capital and private equity financing for the quarter came in at $2.4 billion, slightly down from $2.9 billion in the first quarter. The total investment through the first half of 2010 of $5.2 billion, however, far surpasses the $3.2 billion raised over the same six-month period last year.