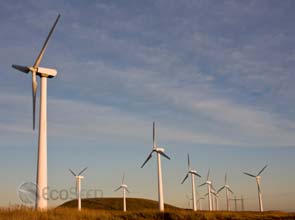 Vestas Wind Systems Americas has won a contract to supply 570 megawatts worth of wind turbines to Terra-Gen Power L.L.C.’s Alta Wind Energy Center in California – their largest order for a single site to date.

The Danish wind turbine manufacturer will supply 190 units of its V90-3.0 MW wind turbine to the wind energy center near Tehachapi. The Alta project is slated to be one of the largest wind energy developments in the United States, with plans to bring 3,000 MW worth of wind energy online through a roster of wind energy facilities.

Aside from supplying the wind turbines, Vestas will also commission the units and administer service and maintenance for five years.

“When completed, it will be the largest wind farm we will have supplied turbines to in our 31-year history as well as the biggest in California,” says Martha Wyrsch, president of Vestas Americas.
Its parent company, Denmark-based Vestas Wind Systems A/S (OMX:
VWS
), delivered its first wind turbine to North America in 1981 and has supplied more than 11,000 turbines ever since.

Recently, Terra-Gen also collected $1.2 billion to fund the remaining four wind projects, which will have a total generating capacity of 570 MW.

Southern California Edison already signed a power purchase agreement with Terra-Gen for 1,550 MW of the energy generated from the Alta project. The utility will then distribute the power across Southern California through its Tehachapi renewable transmission project.

“The project represents an important expansion to the renewable generating base of California and helps us advance our nation’s goals of achieving energy independence in an environmentally responsible manner,” said Jim Pagano, chief executive of Terra-Gen Power.