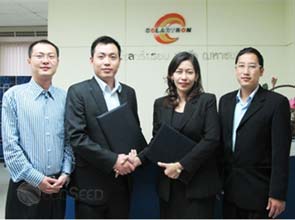 Large solar developments continue to make progress in Thailand, a trend which would hopefully be resonated in the wider Southeast Asian energy market.

Bangchak Petroleum Public, one of the country’s biggest oil refiners, broke ground on Thursday for 44-megawatt solar farm in Ayutthaya province, in the outskirts of the capital.

Chinese solar giant Suntech Power Company obtained the deal to deliver 34.5 MW worth of crystalline silicon solar panels for the first phase of the power station, which will be built by Solartron Public Company. The facility is planned to be completed by October 2011 at a total cost of 5 billion Thai baht ($156 million).

The solar plant is expected to rake in yearly revenues of 700 million Thai baht by supplying power to Bangkok and surrounding areas with popular tourist destinations, the Nation reports.

At the groundbreaking, Bangchak also announced plans to invest about 23 billion Thai baht over the next five years in clean energy, of which 15 billion Thai baht will go to 11 solar power plants with a combined capacity of at least 120 MW.

Bangchak expects the slew of planned solar sites and the 44-MW farm to generate about 2 billion Thai baht a year in revenues. Suntech described the facility as the region’s largest photovoltaic solar facility to date.

But Bangchak’s solar farm probably will not hold that distinction for long as more companies plan to build solar farms with higher capacities.

Malaysia’s Bernama reported that the second phase of the project will increase capacity to 84 MW. The solar plant requires a total investment of 9.2 billion Thai baht and is planned to go online next year.

Japan’s Sharp Corporation, another giant in the solar PV business, signed in June an agreement with NED, an independent Thai power producer, to build another 73-MW thin-film solar farm. Sharp said construction has started and the plant will be running by late 2011.

Like many countries, Thailand depends on imported energy though it receives abundant sun. By 2017, energy consumption in the country is predicted to reach 2.1 trillion baht. The government has set a target of getting 20 percent of its energy from renewable resources by 2022.

The Thai national plan for solar energy also envisions at least a fifteen-fold increase in solar power capacity – from 36 MW in 2008 to 550 MW – by the same year.

A report from the Asian Development Bank in 2009 projected that energy demand in Asia and the Pacific will grow by an estimated 2.4 percent annually for the next 20 years, a cumulative 80 percent increase between 2005 and 2030.
Suntech (NYSE:
STP
) believes that solar technology will account largely for this rapidly growing demand for electricity.

Zhengrong Shi, Suntech chairman, said reliable access to electricity made the strong economic growth seen in China and Thailand possible, and relying on fossil fuels alone is not enough to fuel this progress and the demands of its rising populations.

“Now is the time to rediscover nature’s cleanest and most abundant energy resource,» Dr. Shi said.