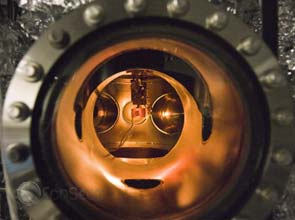 Engineers at Stanford University  in California have developed a new process that could double the efficiency of the existing solar cell technology by using both the light and heat of solar radiation to generate electricity.

Called Photon Enhanced Thermionic Emission (PETE), the process can also potentially reduce the costs of solar energy production enough for it to compete with oil as a viable energy source.

«This is really a conceptual breakthrough, a new energy conversion process, not just a new material or a slightly different tweak,» said Nick Melosh, an assistant professor of materials science and engineering, who led the research group.

Most photovoltaic cells use semiconducting materials such as silicon to convert the energy from photons of light into electricity. However, only a portion of the light spectrum is used, while the rest is used for generating heat.

Waste heat accounts for a loss of over 50 percent of the initial solar energy that reaches the solar cell.

Scientists believe that if this waste heat energy could also be harvested, solar cells would be much more efficient. High temperatures are required to power heat-based conversion systems, but solar cell efficiency decreases quickly at higher temperatures.

Thus, Mr. Melosh and his colleagues came up with a way to combine thermal and solar cell conversion technologies. They coated a piece of semiconducting material with a thin layer of metal cesium, which will allow it to use both light and heat to generate electricity.

«What we’ve demonstrated is a new physical process that is not based on standard photovoltaic mechanisms, but can give you a photovoltaic-like response at very high temperatures,» Mr. Melosh said.

«In fact, it works better at higher temperatures. The higher the better,» he added.

Conventional photovoltaic systems cannot get hot enough to generate waste heat that can be used in thermal energy conversion. In fact, most silicon solar cells have been rendered useless by the time the temperature reaches 100°C.

However, the PETE device does not hit peak efficiency until it is well over 200°C, making it suitable for generating usable high-temperature waste heat. The device will work best in solar concentrators such as parabolic dishes, which can get as hot as 800°C.

«The light would come in and hit our PETE device first, where we would take advantage of both the incident light and the heat that it produces, and then we would dump the waste heat to their existing thermal conversion systems,» Mr. Melosh explained.

However, the efficiency rate is still mostly theoretical as the PETE process is still in the testing and development stage.

The researchers used a gallium nitride semiconductor in the proof of concept tests because it was the only material that had shown indications of being able to withstand the high temperature range. The tests resulted in efficiency well below the calculated potential efficiency, which the researchers anticipated.

The team believes that with the right material – most likely a semiconductor such as gallium arsenide – the actual efficiency of the process could reach the calculated efficiency.

«Even if we don’t achieve perfect efficiency, let’s say we give a 10 percent boost to the efficiency of solar conversion, going from 20 percent efficiency to 30 percent, that is still a 50 percent increase overall,» Mr. Melosh pointed out.

Another advantage of the PETE system is that by using it in solar concentrators, the amount of a semiconductor material needed for a device is quite small.

One obstacle in the development of solar energy is the high cost of materials, so reducing the amount of investment capital needed to build a solar farm is a big achievement and can help make solar energy competitive with oil.

The Global Climate Energy Project at Stanford and the Stanford Institute for Materials and Energy Science, a joint venture of the university and SLAC National Accelerator Laboratory, funded the solar research. The Department of Energy and the Defense Advanced Research Projects Agency provided additional support.