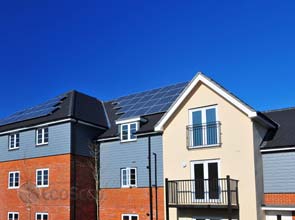 SunPower Corporation’s residential and commercial business buoyed revenues from $347.3 million to $384.2 million from the first to the second quarter of its 2010 fiscal year, which ended on July 4.

Its residential and commercial segment contributed 69 percent of its total quarterly revenues, up from its 59 percent share in the previous quarter.

In contrast, SunPower’s revenues from utility and power plants’ revenue share went down from 41 percent to 31 percent.

“In the residential and commercial business, we expanded our global dealer footprint in the United States, France and Italy, as well as hit a new milestone for project scale within our commercial business with a 4-megawatt project for Dow Jones & Company,” said Tom Werner, chief executive of SunPower.

The company signed a deal with Dow Jones in June to build a 4.1-megawatt solar power system at the latter’s corporate offices in New Jersey.

Meanwhile, SunPower also pointed out major deals in its utility and power plants segment, such as the 48 million euro ($62.5 million) deal with Etrion Corporation for the equity sale of two of SunPower’s solar power plants in Italy.

The company revealed a gross margin increase for the second quarter of 22.9 percent from 20.7 percent. SunPower also saw a quarter-over-quarter cost reduction from $1.91 to $1.71 per watt, and aims to further reduce this to $1.48 by 2011.

“During the second quarter we continued to focus on improving our balance sheet and managing our liquidity. Our joint venture with AUO will reduce our capital outlay for Fab 3 by approximately 50 percent and further deleverage our balance sheet,” said Dennis Arriola, chief finance officer.

SunPower formed a joint venture with AU Optronics in May to operate a 1.4-gigawatt solar cell production facility in Malaysia. The facility will begin production by the fourth quarter of this year.

SunPower significantly reduced its vulnerability related to net euro exposure by hedging 93 percent of that exposure at $1.35 to 1 euro.

The company ended the quarter with $737 million worth of total cash and investments and $75 million in additional liquidity under an International Finance Corporation loan.
With these promising financial results for the quarter, SunPower (Nasdaq:
SPWRA
,
SPWRB
) expects to meet its full-year guidance this 2010 and have another productive year in 2011.

“We also remain confident in our 2011 visibility on both volume and price, as we have more than 100 MW of utility power plants orders booked for next year with our 2011 first-quarter bookings at the best levels in two years,” Mr. Werner said.