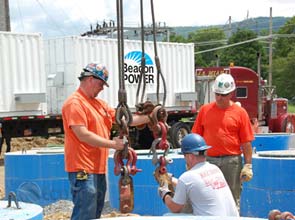 Beacon Power Corporation got its hands on a $43 million loan guarantee from the United States Department of Energy to cover over half the costs of building its novel 20-megawatt energy storage concept in Stephentown, New York.

Beacon Power claims that its facility will be the first of its kind in the world. A flywheel battery is basically a kinetic or mechanical battery that spins at very high speeds to generate and store energy.

The flywheel plant absorbs surplus electricity from the grid and stores it as kinetic energy in a matrix of flywheel systems. When power demand is higher than supply, the storage plant can provide energy and maintain proper electricity frequency to the power system.

Beacon said flywheel plants are also promising for renewables as they are capable of integrating increased amounts of intermittent renewable energy sources such as wind energy and solar power, acting as grid shock absorbers.

The Department of Energy loan covers over 60 percent of the project cost, which is estimated to hit $69 million. Beacon will provide the rest of the financing.

“With the closing of this financing for our first 20-MW plant, we look forward to growing the company, creating jobs and continuing to deploy our technology in the U.S.,» said Bill Capp, Beacon president and chief executive officer.

The Department of Energy’s estimates suggest that the energy generation capability of the plant could cut carbon dioxide emissions by approximately 82 across its 20-year life-span compared with a coal, gas or pumped hydropower plant.

Energy Secretary Steven Chu said the government will continue to support the development and deployment of innovative energy systems like the flywheel.