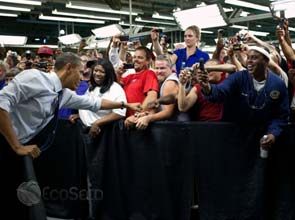 The stimulus funding will help make the cost of producing solar power on a par with the cost of power from the grid. Electricity produced from rooftop panels will drop by half by 2015, from 21 cents per kilowatt-hour to 10 cents per kWh.

Funding from the Recovery Act is also helping build large-scale solar power projects, including the 25-megawatt DeSoto next generation solar energy center, which is said to be the largest photovoltaic power facility in North America. The power plant, which was partially supported by stimulus funding, is equipped with more than 90,000 solar panels to supply clean electricity to 3,000 homes.

At a broader level, stimulus funding worth $23 million could double renewable energy capacity from 28.8 gigawatts of solar, wind and geothermal generation, to 57.6 GW by the end of 2011. If this target is achieved, there would be enough renewable power to support 16.7 million homes.

Meanwhile, in medical research, stimulus investment is reducing the cost of a personal human genome map to allow sequencing of 50 for the same cost of mapping one today.

«From the beginning, we have been a nation of discovery and innovation – and today we continue in that tradition as Recovery Act investments pave the way for game-changing breakthroughs in transportation, energy and medical research,» said Mr. Biden, when he unveiled the Recovery Act report on Tuesday.

«We’re planting the seeds of innovation, but private companies and the nation’s top researchers are helping them grow, launching entire new industries, transforming our economy, and creating hundreds of thousands of new jobs in the process,» he said.