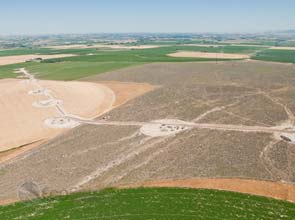 Idaho is on its way to becoming one of the United States’ leaders in wind energy as the state starts construction of its largest wind power project – the 183-megawatt Idaho Wind Partners.

Located eight miles from the Oregon Trail, the wind complex comprises 11 wind farms equipped with 122 G.E. turbines with a capacity of 1.5 MW each. The wind facilities will be scattered across 10,000 acres of farmland in southern Idaho’s Magic Valley.

The project is expected to generate enough renewable energy to power almost 40,000 average Idaho homes annually, as well as offset approximately 331,000 tons of greenhouse gas emissions each year – equal to removing 57,000 cars from the road.

Idaho Power Company signed 20-year power purchase agreements for each of the 11 wind farms to acquire all the power generated by the facilities.

Once completed, the wind complex will be eligible to source funding from the federal Treasury Grant program for renewable energy projects. However, the program is due to expire by the end of 2010.
“While we are delighted to embark on this new renewable energy project in Idaho we are concerned that such projects will become increasingly difficult without imminent passage of federal clean energy legislation,” said Alex Urquhart, president and chief executive of G.E. Energy Financial Services, a subsidiary of General Electric (NYSE:GE)

“Extending that program and other federal incentives would provide the long-term certainty that investors and manufacturers such as G.E. need to ensure continued expansion of renewable energy throughout the country,” he pointed out.