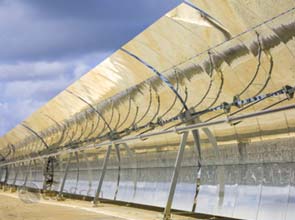 The California Energy Commission approved on Wednesday a proposal to build a 250-megawatt concentrating solar power plant in Kern County – what could be the United States’ first solar thermal power plant in two decades.

The $1 billion Beacon solar energy project was proposed by NextEra Energy Resources, which sent its plan to California’s energy regulatory agency for environmental review in 2008.

About 2,000 acres of farmland in Kern County will be covered by the solar plant that will be located at the western edge of the Mojave Desert, a site being guarded by environment groups. It will use rows of parabolic troughs with mirrors that reflect the sun’s heat on a long circuit of liquid-filled tubing that creates steam to drive electric turbines.

Many companies are scrambling to secure licenses for their solar power plants and to break ground before year-end when federal incentives for renewable energy projects expire.

Power utilities could also be feeling the pressure as they are required to meet a state mandate to derive at least 20 percent of their electricity from renewable sources also within the year.

The bureau has received approval requests for 34 solar thermal projects that together would contribute about 24,000 MW to the grid, covering over 300,000 acres of the Mojave Desert, according to the commission.

In order to cope with the influx of requests, both agencies signed a memorandum of understanding to form a joint review process that drafts a timeline for coordinated action.
The last thermal solar plant project to be approved in the United States was a combination solar thermal and natural gas plant near Harper Dry Lake in San Bernardino County. It went online in November 1990 and is now owned by a subsidiary of NextEra (NYSE:NEE).

The state energy commission actually did approve plans for a hybrid solar thermal plant two years ago but the project was not built. The Victorville 2 hybrid power plant was given construction approval in July 2008 and will also use parabolic solar thermal collectors covering 250 acres of land at the former George Air Force Base. The project was reportedly put on hold for lack of funding.