Consortium team up for 120-MW solar thermal project in Israel 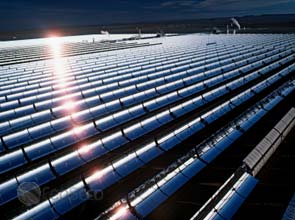 Both companies have passed the prequalification stage and are slated to submit a bid.

The energy generated from the project will be fed to the power grid of Israel Electric Corporation.

“The Ashalim opportunity, if successful, will expand our solar activities to solar thermal, where we have technological expertise,” said Lucien Bronicki, board chairman and chief technology officer of Ormat Technologies.

The company has been developing solar energy for the past 40 years, starting with its first solar pumping unit in Africa. Ormat recently entered the photovoltaic market via a joint venture that develops medium-size solar photovoltaic plants, Mr. Bronicki added.

Solar Millennium (Pink Sheets:SMLNF) is one of the leading companies in the concentrating solar power market and is responsible for 50-MW solar thermal plants in southern Spain, the first European parabolic trough power plants. The company is developing similar plants in Egypt and the United States.