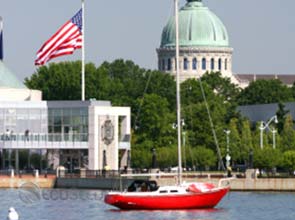 The state of Maryland can meet its renewable energy goals through harnessing offshore wind but it must first overcome some economic and political hurdles.

This was the conclusion of a new study conducted by the University of Maryland Center for Integrative Environmental Research which is said to be the most in-depth feasibility assessment of developing and operating wind farms in the Atlantic coastal waters.

The study discovers that offshore wind holds the potential to help the state meet its goal of sourcing one-fifth of its electricity generated from renewable energy sources by 2022.

«Not only would offshore wind development help Maryland meet its renewable energy goals, but it would also provide ancillary benefits, such as jobs and industry development, and further position the state as an environmental first mover,» said Matthias Ruth, a public policy professor and director of the research center.

However, there are two hurdles that the state government must overcome in order to move forward with offshore wind development – radar and military interference and inadequate transmission facilities.

Wind farms can interfere with radar installations at the National Aeronautics and Space Administration’s Wallops flight facility, as well as other military operations such as flight-testing, training exercises and munitions deployment.

Meanwhile, because of insufficient transmission facilities on Maryland’s Eastern Shore, the cost of moving the energy produced from offshore wind farms to the utility grids would be very expensive.

«The impediments are not technical, they are institutional,» said Andrew Blohm, another researcher at the center. Ultimately, overcoming the hurdles will require close collaboration between Maryland, Delaware and the federal government.»

The connection of wind farms in Maryland waters to the electric utility grid could be accomplished most economically in Delaware.

«On the Delmarva Peninsula, the Delaware side of the state line has a more fully developed, and in this case, a more strategically located electric transmission system than Maryland’s Eastern Shore,” explained Mr. Blohm.

While this does not prevent placement of offshore wind facilities in the state, it does, however, complicate the interconnection process and may require a more regional approach to development.

The study also finds that the overall costs of operating offshore wind farms on the Maryland coast stays relatively the same at around $1,850 per kilowatt, regardless of whether the turbines are in shallow or deep waters. Ultimately, both locations would have similar economic feasibility.