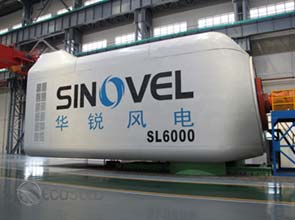 Sinovel Wind Group Co., the largest manufacturer of wind turbines in China, has developed the country’s first 6-megawatt wind turbine prototype that can be installed on the sea and onshore.

The SL6000, which Sinovel developed, has a blade diameter of 128 meters for capturing stronger winds. The 6-MW turbine is designed to work normally under very cold temperatures.

Sinovel joins other wind turbine manufacturers Vestas Wind Systems and Clipper Windpower which have been investing in large wind turbines, said to be more economical in the long run.

Vestas, the world’s biggest wind turbine manufacturer by market share, unveiled its 7-MW offshore wind turbine in March this year, which the company plans to mass produce in 2015. The V164 wind turbine has 80-meter-long blades, with a rotor diameter of 164 meters.

It was developed specifically for the offshore category.

An even larger design made news in September 2009, when United States-based Clipper Windpower was awarded £4.4 million ($7.26 million) for its 10-MW offshore wind prototype called the Britannia. The wind turbine itself is set for deployment late 2011, to be among the largest of its kind in the world.

“The development of the product has given a boost to the upstream production of parts and components in China,” said Tao Gang, senior vice president of Sinovel, adding their company’s turbine would boost to China’s wind power industry, especially offshore projects.

Mr. Tao said developing larger wind turbines was inevitable with the advance of the wind industry, particularly the offshore sector.

In fact there are other Chinese wind turbine manufacturers developing large-capacity turbines. Among them is Xiangtan Electrical Machinery Ltd., a Hunan-based company that was able to launch a 5-MW prototype last October.

Sinovel has reportedly started developing a 10-MW wind turbine model on its own.

“China has become the single largest driver for global wind power development. In 2010, every second wind turbine that was added anywhere in the world was installed in China,” said Steve Sawyer, the Global Wind Energy Council’s secretary general.

There have been around 1,300 wind turbines that got disconnected from the power grid in the cities of Jiuquan in Gansu province and in Zhangjiakou, Hebei. The disconnection of the wind turbines equates to a 54 percent loss in wind power output.

At present, China’s wind turbines do not feature L.V.R.T. technology that keeps the wind turbine in operation even at times of large voltage dips.