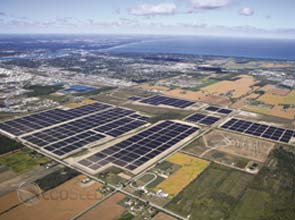 First Solar, Inc. , the worlds largest maker of thin-film solar modules, received $455.7 million worth in loan guarantees from the Export-Import Bank of the United States for two solar power projects in Ontario.

The bank will guarantee a loan worth $236.7 million for a 50-megawatt plant to be built in the townships of Amherstburg, Belmont and Walpole. Another guarantee for a $219 million loan was also approved for a 40-MW solar farm in St. Clair.

The bank, which provides guarantees or insurance for foreign lines of credit, will secure the commercial loans of First Solar in the case of a default. The debt will help finance parts First Solar will export to Ontario for the construction of the projects and are to be repaid over 18 years.

First Solar’s manufacturing facility in Perrysburg, Ohio, where chairman and bank president Fred Hochberg announced the deal, could be the factory where the panels and parts for the Ontario solar farms will be built.

The guarantees are the largest the bank approved for solar products from the United States shipped abroad, according to a statement. Earlier this year, the bank also approved loan guarantees of $118 million for solar projects in India that will use First Solar panels.

First Solar said it needs the bank’s help in the projects «because viable long-term financing for these projects was not otherwise available in the commercial marketplace.»

«Financing costs represent a major part of any solar project, so this support helps accelerate the deployment of renewable energy worldwide.»

Out of the $650 million the bank committed in support of U.S. goods and services to solar projects as of September 1, $573 million was given to First Solar’s exports to projects in India and Canada.

The Export-Import Bank is an independent federal agency that aims to create and maintain U.S. jobs through financing export projects. The bank operates without taxpayer funding by charging fees and interest on its loans.

According to its recent financial report, the 50-MW project will be owned by Vancouver-based Plutonic Power and General Energy Financial Services, while NextEra Energy Resources will own the 40-MW facility.

The owners are expected to sell the power generated from the PV systems to the Ontario Power Authority under the terms of a 20-year power purchase agreement.

Ontario’s feed-in tariff program, created by the province’s Green Energy Act, states that the Ontario Power Authority will buy electricity from solar and wind energy producers at above-market rates as long as it is generated with a set proportion of Canada-made equipment or service.

Based on information posted on the utility’s Web site, onshore wind power is paid a guaranteed feed-in rate of 13.5 cents per kilowatt-hour it produces and up to 88.2 cents for solar projects greater than 10-kW.

The Ontario feed-in tariff program pay premium rates to solar projects only if at least 40 percent of their initial development is made up of Ontario products and services. The domestic content requirement is then raised to 60 percent for solar projects developed after this year.

Total exports of solar products from the United States more than doubled from 2.3 billion in 2009 to $5.6 billion last year, the Solar Energy Industries Association said in a report published last month. The top solar import was photovoltaic modules, worth $2.4 billion.

Obama vowed to double exports by 2015 in an effort to create jobs and counter a current unemployment rate that stood at 9.1 percent in July. In June, The value of the United States’ exports was $170.9 billion.

Achieving that promise could be more difficult after the Commerce Department reported on Aug. 11 that the country’s sales of goods and services abroad fell 2.3 percent in June.

The Export-Import bank loan guarantees came on the heels of several Chapter 11 bankruptcies within the solar industry, partly as a result of increasing competition from Asia and policy changes in Key European Markets.

Last week, Solyndra L.L.C. announced it was filling for Chapter 11 and will close a factory it built recently with a $535 million federal loan from the Department of Energy. The United States House of Representatives is currently investigating the collapse of the California-based solar startup.

Another solar company, SpectraWatt Inc. headquartered in New York., filed for Chapter 11on August 19, four days after Evergreen Solar Inc. from Massachusetts did the same.