Japan can be nuclear-free by going renewable – Greenpeace 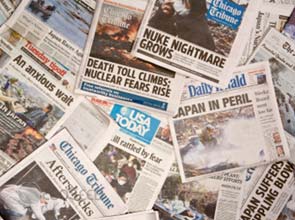 As Japan struggles to recover and contain the effects of the accident at the Fukushima Daiichi nuclear plant, environmental campaigner Greenpeace released a study that claims Japan can achieve a permanent nuclear shutdown by 2012.

According to Greenpeace’s «Advanced Energy Revolution» report, Japan’s power needs can be met by renewable energy sources – mostly wind and solar – in a way that will allow and promote economic recovery.

«The tremendous potential of Japan’s renewable energy industry not only allows it to retire its existing nuclear plants, but provides a huge opportunity to boost the economy by creating thousands of green jobs,» said Sven Teske, director of Greenpeace International’s renewable energy campaign.

The report, with calculations done by the German Aerospace Center and the Institute for Sustainable Energy Policies, show that Japan’s wind and solar generation capacity can be ramped up from the existing 3,500 megawatts to 47,200 MW by 2015.

«With only 11 out of 54 reactors online at the height of summer and little impact to daily life, Japan has already proven that by conserving energy it does not need nuclear power», said Hisayo Takada, Greenpeace Japan climate and energy campaigner.

If the short-term energy efficiency measures already in place in Japan remain in place, the Greenpeace report sees the potential to reduce total energy use by 1.7 percent between 2011 and 2020.

Given this scenario, it would be possible for nuclear power generation to be phased out by 2012.

With the increase in renewables also comes an increase in jobs in the energy sector. As of 2010, there were approximately 81,500 electricity sector jobs in Japan, but this could increase to 326,000 by 2015, according to the report.

The phase-out of nuclear power and increase of renewables would then allow Japan to reach its pledge of reducing greenhouse gas emissions by 25 percent below 1990 levels by 2020.

Previously, Japan had hinted that the nuclear safety crisis and the shutdown of Fukushima could make it harder to meet their goals as the country might be forced to greater reliance on fossil fuels.

The environment ministry’s scenarios for achieving 25 percent carbon reduction are all based on a government plan to add nine new commercial nuclear reactors by 2020 to the 54 currently in operation.

Japan is not the only country whose energy future is in question because of the Fukushima disaster.

Merely days after Fukushima, the European Union agreed to set the «highest standards» of nuclear safety and stress test all their nuclear reactors. Europe has around 143 reactors and France, Germany and Spain raised the possibility of closing any of their own plants if they failed the tests.

In the United States, a Reuters reportfound that many analysts saw plans for nuclear power investments having been sidelined due to the rekindled debate over whether the benefits of nuclear power outweigh the risks.

A survey taken days after Fukushima by the Civil Society Institute found that most Americans were more supportive of increasing the use of renewables and energy efficiency measures as safer alternatives to nuclear power.

Fifty three percent of the respondents said they would favor a moratorium on new nuclear reactor construction in the United States if energy efficiency and off-the-shelf renewable technologies such as wind and solar could meet their energy demands for the near term.

This was despite the fact that President Barack Obama’s State of the Union address in January included nuclear in its clean energy sources.

But the strongest reaction has been from Germany, where, after Fukushima, a moratorium was placed ordering the closure of all nuclear plants which began operating before 1980 for at least three months so that they could undergo safety checks.

Two months afterwards, Chancellor Angela Merkel announced that Germany would shut down all nuclear reactors by 2022, a move that received backing from the cabinet.

Germany has a large renewable energy sector and is the third largest user of wind power in the world with around 27.2 gigawatts as of 2010. The government currently seems to be banking on increasing the use of wind power to ensure a smooth transition to the nuclear phase-out.

They found that harnessing all the existing wind resource potential in Germany could yield 198 gigawatts a year or 65 percent of the current electricity demand.

Onshore wind could provide 390 terawatt-hours out of the current 600 terawatt-hours of electricity consumption a year. In the timeframe of the study, nuclear energy only generated 140 terawatt hours.

Meanwhile, power companies that include nuclear energy in their portfolios are already feeling the crunch, with Vattenfall A.B. and utility RWE reporting losses and citing Germany’s decision to phase out nuclear power as a reason.

Both companies also stated that they intend to address the problem by increasing their investments in renewable energy projects.