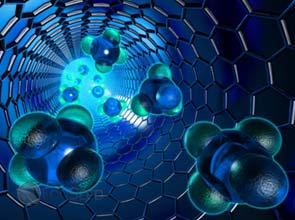 Every year, new and improved means to incorporating low-carbon technologies into our daily lives are being developed. While sun, wind and bioenergy are well-covered topics in EcoSeed, lets look back at a few more technological trends and developments.

Water, sunlight and the right catalyst

This year saw scientists putting a lot of effort in generating hydrogen catalysts from a variety of substances, usually cheaper metals or minerals, to come up with combinations of different materials to trigger water splitting, where a chemical reaction induces water to separate into hydrogen and oxygen.

Hydrogen is considered a source of clean fuel as it has no harmful emissions – only water vapor. If we could come up with an efficient and economical water splitting process, hydrogen could benefit us. The most common catalysts are platinum or platinum-based. Platinum is a precious metal that is more expensive than gold, priced at an average of around $1,800 an ounce.

A team of researchers from the University of Kentucky and Louisville used a gallium nitride-antimony alloy; another team from Monash University used «black stain» or birnessite, a dark substance found in manganese-rich mineral deposits; while Purdue University in Indiana used several abundant but cheap metals – aluminum, gallium, indium, and tin – to trigger water splitting.

Aside from being cheap, another good quality of a water-splitting catalyst would be its ability to react to sunlight. Sunlight can trigger an electric current that causes the catalyst to react. The gallium nitride-antimony alloy of the University of Kentucky and the University of Louisiana uses sunlight to trigger water splitting.

So can an «artificial leaf» developed by the Massachusetts Institute of Technology. The artificial leaf builds on research by Professor Daniel Nocera, who has been working with water splitting catalysts using cobalt and phosphate since 2008.

It is basically a small silicon solar cell coated with different catalysts – cobalt borate and nickel-molybdenum-zinc – on each side.

When sunlight hits the artificial leaf, the cobalt borate side separates the oxygen in the water while the nickel-molybdenum-zinc alloy separated the hydrogen. Current models of this artificial leaf can redirect about 2.5 percent of the sun’s energy into hydrogen production.

The artificial leaf is said to be one of the most promising developments in the quest for the development of a commercially viable means of creating hydrogen for power.

Lithium-ion batteries are seen as the best of the next generation of energy storage, with their high energy densities and more charge and recharge cycles. The recharging ability of a lithium-ion battery is supposed to increase its usefulness but each charge cycle damages the battery’s material, decreasing storage capacity.

Rensselaer Polytechnic tried to make a sturdier battery by using microscopic structures they dubbed «nanoscoops» in their battery anode material. The «nanoscooped» material was made from layering materials, a carbon nanorod base with a thin coating of nanoscale aluminum and a «scoop» of nanoscale silicon.

The result was a battery that can be recharged and discharged at a rate 40 to 60 percent faster than current technologies, with less damage as the nanoscoop structure was more flexible and capable of surviving the contractions inherent to the charge-recharge cycle.

The Lawrence Berkeley National Laboratory also worked with layered nanoscale materials for a quick-charge battery without degradation. They used graphene and tin assembled in alternating thin layers that were separated by small pillars, also for greater flexibility to cope with the stress of the charge-recharge cycle.

One of the biggest developments in the field for this year however, has to be a technology developed by the University of Illinois at Urbana-Champaign, which is now licensed to Colorado-based Xerion Advanced Battery Corp.

It centers upon a new structure for battery cathodes that can work on lithium-ion batteries but also with another type of rechargeable battery called nickel-metal hydride. Batteries produced with this electrode are said to be able to charge or discharge in a matter of seconds or 10 to 100 times faster than those with conventional electrodes.

The electrode design was developed by a team led by materials science and engineering professor Paul Braun. The design basically requires wrapping a thin film into a three-dimensional structure around the battery’s cathode.

While the exact materials used were not revealed, the team credits the design for the battery’s fast charge and discharge capabilities. Xerion plans to develop batteries using this design for commercial use, though the first deployment of the technology will probably be from the U.S. military.

A study from the Pacific Northwest National Laboratory released this year conducted a comprehensive review of electrochemical energy storage systems which store electricity in chemicals and release it on demand.

While lithium-ion batteries were covered, the study pointed out the importance of developing another type – vanadium redox flow batteries.

According to P.N.N.L., batteries such as this are good candidates for backup energy, but their most important implication for the low-carbon economy is they can store wind and solar power in a way that could make grid integration easier.

The lab also announced the development of a better vanadium redox battery from their researchers which used a new electrolyte fluid as an alternative to the common sulfuric acid.

Sulfuric acid is said to have two disadvantages. They can only hold a few vanadium ions – which limit the generation capacity; and they have a limited operating temperature range of 50 to 104 degrees Fahrenheit.

The limited working temperature often means a vanadium redox battery system also needs a cooling system which can cause up to 20 percent energy loss and bring up the entire thing’s operating cost.

This new mixture could improve operations and decrease costs as less fluid would be needed for the battery to operate at capacity. This would result in smaller tanks and less use of material, and better operating temperatures would reduce the need for a cooling system.

Another type of flow battery is being developed at the Massachusetts Institute of Technology, which uses an electrolyte liquid dubbed «Cambridge crude,» a black gooey substance that they say provides a tenfold improvement in energy density over present flow batteries, at a lower manufacturing cost than lithium-ion batteries.

A California startup, Primus Power, decided to bank on flow batteries this year, raising $11 million in a funding round to develop their low-cost flow batteries for renewable energy. While the company has been keeping the details of their design under wraps, they have already received considerable support from the Department of Energy for their technology.

Reducing the cost of solar power to make it cost-competitive with fossil fuel generation is still a goal scientists are working on. Ideally, a solar cell would be made up of a cheap material easy to produce to bring down costs.

Organic solar cells which use organic polymers or molecules in lieu of silicon and other expensive chemical elements would seem an ideal answer to that conundrum. They are also produced using low-cost equipment and techniques similar to ink-jet printers to deposit or coat the materials onto a base.

The problem is they have low efficiency ratings in converting sunlight to energy.

This could be changing soon, however, with an organic solar cell whose efficiency was reported this year to be 9.8 percent and was achieved by a solar cell manufacturer based in Dresden, Germany called Heliatek G.m.b.H., and confirmed by research organization Fraunhofer ISE CalLab.

To put that in perspective, commercially produced crystalline silicon has an average efficiency of 11 to 19 percent and thin-film gets 4 to 11 percent. The Heliatek cells are just a few points below the poorest silicon cell and the best thin-film cell, giving them a valid chance at being cost-competitive when they come out commercially in the second half of 2012.

But while Heliatek is rather justifiably cagey as to what exactly they do to get the efficiencies they report (company statements credit the synthesizing of the right materials), two teams of researchers from the University of California, Los Angeles and the University of Warwick were not so secretive and reported that they used gold to improve their organic solar cells.

While it would seem that using a precious metal might dilute the «cheapness» factor of the organic solar cell, the researchers stressed that they used small amounts in their cells.

The Warwick team used the gold to form their cells’ electrodes, metallic layers that sandwich the organic materials and channel the current generated from the sun striking the cell. The electrodes are commonly made of indium-tin-oxide, which is not very cost-effective as indium is a rare and expensive material.

The team used a thin gold film only 8 billionths of a meter and formed using a special method they developed to successfully form their electrode – with the minimal amount of gold needed. The cost of fabricating one square meter of film this way was reported to be around $7.3.