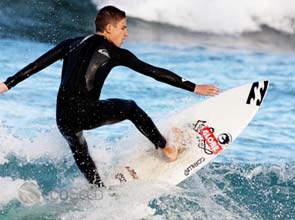 While solar, wind and hydro are among the popular and commonly-used renewable sources, ocean power is an emerging technology that could offer another means of clean energy.

A report from Australia’s national science agency, the Commonwealth Scientific and Industrial Research Organization, says ocean energy from waves, currents and tides could provide as much as 10 percent electricity for Australia by 2050.

«Given the potential of ocean energy and the fact that it’s a very new technology, C.S.I.R.O. wanted to understand what is the sustainable level at which this resource could be used for energy supply and whether it could be competitive with other energy technologies,» said Ian Cresswell, director of C.S.I.R.O.’s Wealth from Oceans Flagship.

Ocean power demonstrates immense potential but the study noted that there are challenges – including cost, reliability and the ocean itself – that will determine its position in the country’s future energy mix.

Areas in the southern coastline are found to have the greatest wave reserve in the country due to the strong southern ocean winds consistently generate large waves, which drive northwards to Australia’s southern coastline.

Likewise, the region’s east coast could also benefit from the wave energy, though not as much in the southern part. It will need detailed plotting to identify the resource.

Tidal power could be used to provide energy for niche areas like northeast Tasmania and the Kimberley region in western part Australia.

While ocean wave power seems to be promising in Australia, further studies and development have to be done to map the nature of the resource, to track its capacity and to understand its wider economic, societal and environmental impacts.

The C.S.I.R.O., through the results of the report, seeks to inform the ocean energy industry, the government and investors about the potential as well as the challenges of this technology, which could add a big share in the energy mix.

Australia sits on area with the most potential for wave power, alongside with western seaboard of Europe, the northern coast of the United Kingdom, Pacific coastlines of North and South America, Southern Africa and New Zealand.