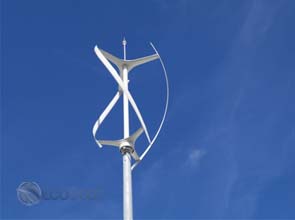 However, a lot of updating must be made on current VAWT designs – like incorporating some techniques from Horizontal axis wind turbines.

Vertical axis wind turbines could be better suited for offshore wind projects because they offer a more economical method of harnessing the power of offshore breeze.

However, a lot of updating must be made on current VAWT designs – like incorporating some techniques from Horizontal axis wind turbines.

Under a Department of Energy research program which is looking into new rotor technologies for offshore wind power generation, researchers from Sandia National Laboratories are studying the architecture of VAWT’s.

The five-year, $4.1 million project began in January this year and has so far found that with some updates, VAWT’s could be the key to cost-effective offshore wind power generation.

“VAWT’s are elegant in terms of their mechanical simplicity,” said Josh Paquette, one of Sandia’s two principal investigators on the project. “They have fewer parts because they don’t need a control system to point them toward the blowing wind to generate power.”

According to their findings, VAWT’s offer three big advantages that could make them the cheaper option for offshore wind power generation – they have a lower turbine center of gravity; they have reduced machine complexity; and they are easier to scale to very large sizes.

Having a lower center of gravity means improved stability afloat and lower gravitational fatigue loads. Also, as the drive train on a VAWT is at or near the surface, maintenance is easier. Fewer parts, lower fatigue loads and simpler maintenance will all lead to reduced maintenance costs.

It is currently the blades of a VAWT system that poise the challenge for their large-scale use in offshore power generation.

Curved VAWT blades are complex and difficult to manufacture. They also cost more than blades for onshore wind turbines. New manufacturing and engineering techniques that could bring down manufacturing costs as well as simplify the production process are needed.

While VAWT blades avoid gravitational fatigue, they do have a problem with drivetrain fatigue. VAWT’s have two pulses of torque and power for each blade, which results to unsteady loading and can lead to fatigue.

Another challenge is brakes. VAWT designs rely on a mechanical braking system that is more difficult to maintain and less reliable than the aerodynamic brakes used by its horizontal-axis counterpart.

Though VAWT’s were actively developed in the 1970’s and 1980’s, HAWT’s soon emerged as the predominant technology for wind power.

Sandia intends to conduct further research into improving VAWT technology. The first phase of the program will take place over two years and involve creating several concept designs. The second phase will be to build the chosen design over three years, eventually testing it against actual offshore conditions. (Katrice R. Jalbuena)