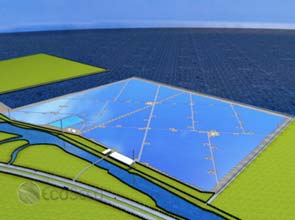 Once operational, the expected annual power generation from the plant will reach 87,000,000 kilowatt-hours, the annual electricity consumption of 30,000 houses.

Japan’s Marubeni is building a large-scale solar power plant with a generation capacity of 81.5 megawatts in the coastal industrial area of Oita City. It will be the largest power business at one single place in Japan.

Once operational, the expected annual power generation from the plant will reach 87,000,000 kilowatt-hours, the annual electricity consumption of 30,000 houses.

Marubeni is creating a new special purpose company for the project which will begin construction in November of this year.

The plant will occupy land owned by subsidiary Marubeni Ennex Corporation, Showa Denko K.K. and others.

The commissioning of the power plant is scheduled to be after March 2014. Power generated will be sold to Kyushu Electric Power Co., Inc. over 20 years.

Currently, Japanese tariffs for solar PV are among the highest in the world at about 42 yen or $0.534 per kilowatt-hour.

Japan itself is a growing market for solar power generation projects. According to the latest Ren21 report, Japan is third among the top countries for total installed capacity as of 2011. Japan also ranks third globally for total operating capacity with 1.3 gigawatts.

Marubeni currently has 531.5 MW worth of power generation plants from renewable energy sources in seven countries. The Japanese trading company is one of the largest general trading companies in the country. – K.R. Jalbuena